It is 12 a.m. and my teeth are chattering; I feel my lungs shiver. But despite the cold and the lack of sleep, my eyes abruptly open in the dark. I swiftly get out of the sleeping bag, not because I want to, but out of obligation. Responsibility sits heavily on my shoulders from last night, the responsibility that I carry as a member of a team: the need to put on my harness and be ready on time, the burden of not leaning on someone else. I quickly pull down my sweatpants and nestle into my ski pants, pull the string of my harness, don my plastic mountaineering boots and gaiters to keep out the snow.

When I am ready to leave, I zip open the tent, the icy winds caress my cheeks, ears, and hands. My fingers prick as I move them, and as I put on my crampons outside, I wonder if there’s a chance of amputation due to frostbite.

There are a few zombies moving in the campsite, trying to put their crampons on, or sipping on their steaming soup, provided to them by the Sherpas. The winds seem to rage against us trying to step over the invulnerable creation. Despite the conditions, I feel optimistic. I recall the guides had told us, “It won’t be too hard, most of you will probably make it.” 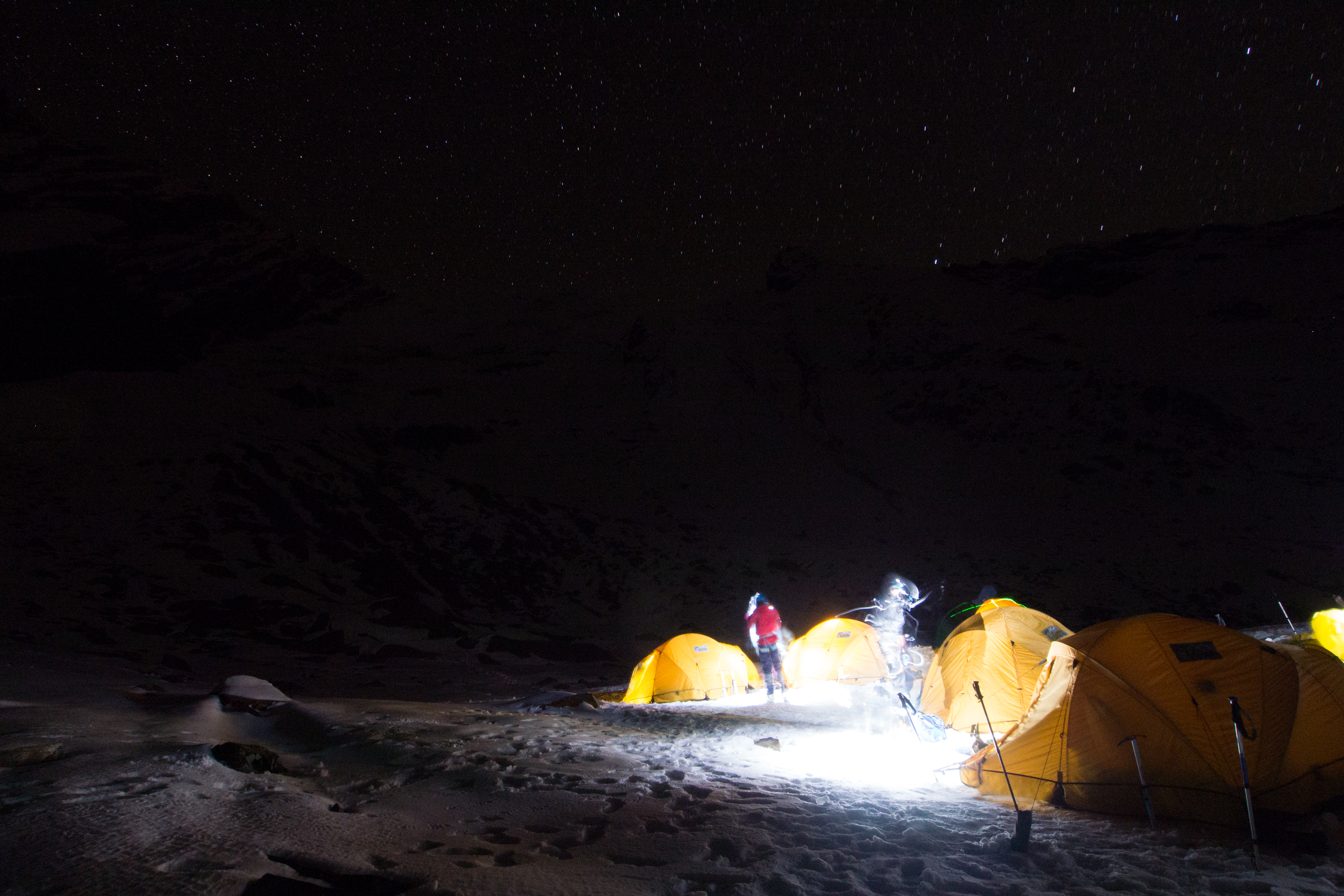 If I am optimistic and responsible for what I do, I think, It won’t be too hard not to be a hindrance to my teammates. Followed by another thought, I will make it to the summit.

Ten minutes before departure time, I observe a student asking the Sherpa to help him put on his crampons, and even his harness and his helmet. He is not ready. Why can’t he do that by himself? Why is he slowing us down?

We are tied in rope teams of five or six people so that if one of us falls, the others can stop them. Due to the delay, we become the last group to start ascending the mountain.

As we are climbing the arduous snow mountain, we face several unexpected complications. Every five minutes, someone is yelling Stop! not loud enough so that I have to echo it to the front. And the whole group stops. From being on the basketball team for three years, I learned the basics of teamwork: communication. However, in this case, it seemed to deteriorate the situation, as the whole group grows increasingly colder, while no progress is made, due to the needs of the few.

The eighth time someone calls out Stop!, I grumble under my breath. What do you mean you think you’re going to die without water? We are already so far behind the other teams. I want to summit. As I start to feel drowsy, I start getting impatient. “LET’S KEEP GOING, WHY ARE WE STOPPING EVERY FIVE MINUTES?” I shout, about ten times.

Despite the shouting, I observe that we are moving no faster than a meter per minute. Something boils in me with frustration: What is the point of being responsible for the sake of others, when no one else cares? Some really aren’t pushing it. What is agonizing me isn’t the people who are seriously at the brink of their physical capacity; it is the people who expect to be babied by others facing the same situation. I wonder why anyone would sign up for the Friendship Peak trek on Activity Week. Didn’t they know they’d be climbing 5300 meters?

So, I try another tactic. This time I shout, “Come on, you’ve got it! Just focus on the very next step and we’ll get to the col soon. It’s really not far. You can rest there!” Getting to the col meant that people who couldn’t take it any longer could untie themselves from the rope and head down with a few guides.

We eventually do not get to the col: we stop at about 500 meters before the col and untie people from the rope. So, from then on, our group comprises of Mr. Ritesh Farmer, Faisal Qadir, Saksham Basu, and myself. And there’s even more delay as people have to figure out how to relieve themselves up at four-thousand meters. The guide, Mr. Rai, reassures us, telling us that there is enough time till the turn-back time, which is at ten.

So we push through and keep walking through the four-foot ice in pitch darkness, with only the headlamps to guide us. Like that, my vision for the next three hours is only the circle of light reflecting on the ice. I feel the air thinning. I start feeling nauseous. I breathe, filling my lungs to their potential. And exhale. Inhale. Exhale. I think of nothing, or I think that I am thinking of nothing. It’s odd as I never think of nothing, or never feel like I’m thinking of nothing.

We lunge aggressively to take the next steps, as if in battle with the snow. As I keep walking, without thinking, the first sign of sunrise hints through the orange line merging with the navy of the sky. We all stop to appreciate the view while taking a break. It is exhilarating. Enormous snow-clad, rocky mountains over one side and the hint of a village on the other. A steep fall below. The houses of the villages look so beautiful with the orange light over them, and so small, like little matchbox houses.

I realize later that that time is the only time I would truly enjoy myself.

When the sun was completely out, no longer hinting at its beauty, the real struggle begins.

Every step we take under the blazing sun, the slope gets steeper. Never have I ever had so much physical exertion in a single day. Panting, eager for oxygen on the 70-degree slope, I am calling out, “Stop! Let’s take a break please.”

However, the guide advises against it. He says, “No, no. Keep going. Snow will get softer and it will get harder.” Okay, keep going. If you take a break here. You will ultimately make it harder for everyone and yourself.

The too-bright sun reflects off the snow; it hurts my eyes despite my sunglasses. Slowly, I am sick of looking at the vast expanses of plain white. The snow is getting deeper, despite the trail made by the guides. One more step. One more step. Breathe in, Breathe out. Whoosh! I plunge into the snow all the way up to my torso. I realize that the snow really is softer with each weary step I take.

Being submerged, I want to put my burning head onto the snow. The temptation grows, but I try stepping onto another patch of snow, hoping that it will be solid. As I almost step up, the snow beneath me crumbles, bringing me down to where I was.

My heart pounds and that’s all I am hearing and thinking. I lay my tired self sideways on the snow. I lay there while the ice caresses my cheeks and penetrates my helmet. There’s ice on my sunglasses.

That’s when I hear Saksham calling out, “Hyenjin! Are you okay?!”

I whimper back, “Yeah, I’m exhausted.”

My brain sparks up and I realize that I am doing exactly what I dreaded, what I condemned others for. I am slowing my team down. I am making it harder for them to summit. Why did I sign up for this?

As I hear Faisal call out, “Let’s go Hyenjin! C’mon, you can see the summit!” I pick myself up and take a successful step forward.

My brain keeps buzzing, If you’re slow, everyone suffers. Faster. Breathe. Keep going. You’re almost there. I keep going until I look up and find the summit exactly where it was before. Why is there so much left still? Why does the distance seem so dreadfully long?

I brush away the thoughts as I focus on the white patch of snow ahead of me. As I keep going without any breaks, I am prostrate as I plunge into the snow again. I lay my head sideways instantly and a pulse throbs in my ear. My head feels empty, like my brain has just been scrubbed of whatever there was to scrub. I should give up, and sit at the side. Let the boys summit. I’ll wait here.

Faisal or Saksham calls out, “Hyenjin, C’mon! Look! There’s just about 100 meters left! You can do this.” I am unsure whose voice it is. But I shout, “Mr. Rai! Can I stop here and wait? Can I stop?”

They call out, “NO! You’ve just got a little bit left. C’mon, Hyenjin. You’ll regret it if you give up now.” No, I’ll regret it if we all struggle because of me. I don’t think I can make it without collapsing several times again. I convince myself that summiting is not the biggest deal and that what matters is that I tried.

At that, Mr. Rai says, “C’mon, C’mon, keep going, you’re almost there.” So I carry my fatigued self up the tremendous slope. My head spins and I feel the ice in my snow gloves. My hands are cold. The cold pierces like huge needles. 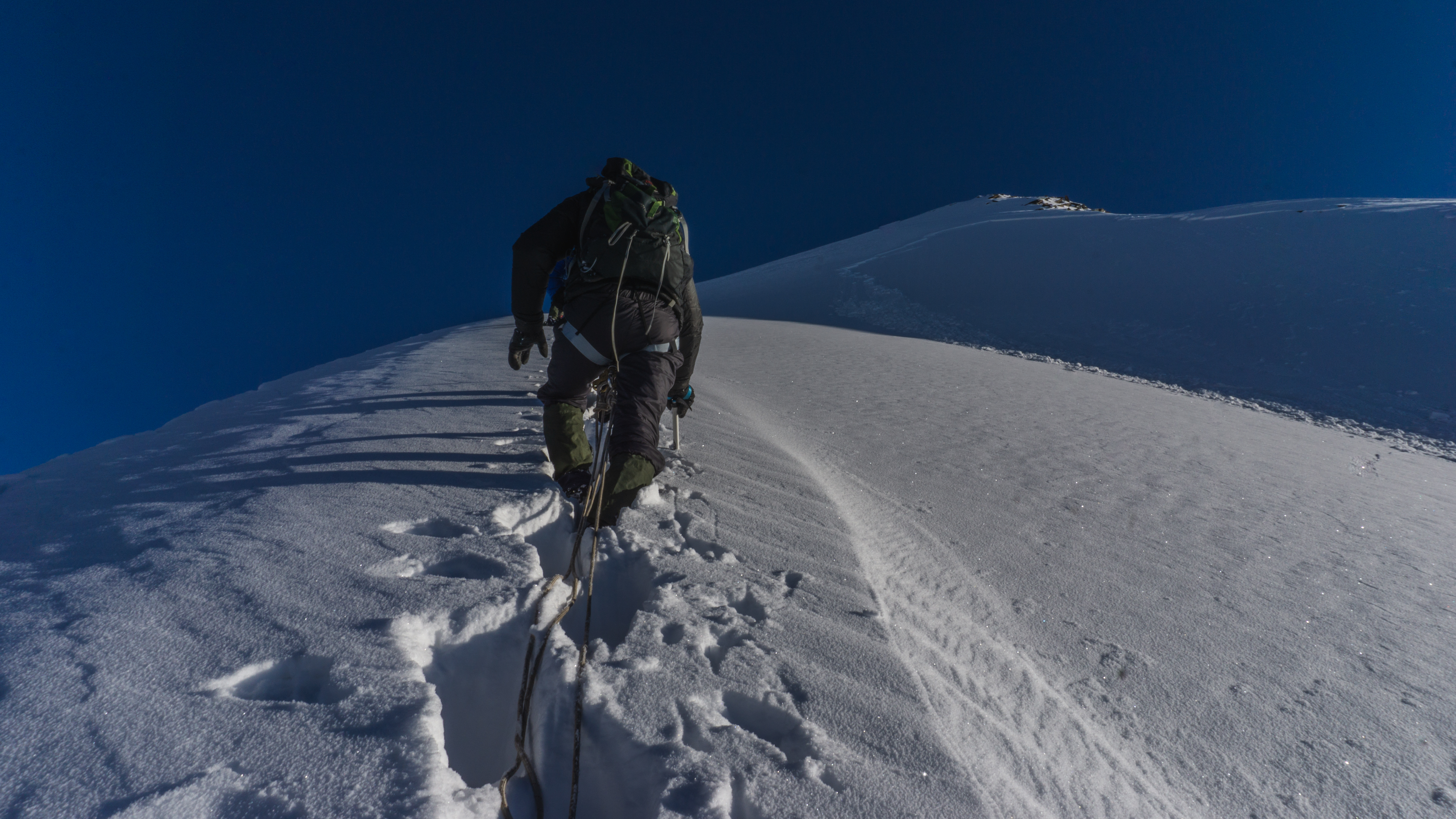 I keep walking until I collapse once and for all. Into the snow. Tears drop and wash my cheeks, I taste the salt.

I lay there on the snow embarrassed of the tears that fog up my sunglasses. They flow uncontrollably. Embarrassed of my weakness, of the hindrance I’m being, I lay there with my eyes shut.

Faisal shouts back, “It’s okay. It’s not about summiting, it’s about making it together! Our adviser group has to hold up the flag together!”

That strikes something within me. I don’t know what. Mr. Rai calls it a break. A sigh of relief escapes my lips. I lay uncomfortably on the steep slope. I drink the water out of my backpack. Due to having oddly positioned myself, I have to stop myself from sliding down the slope with the ice ax. I’m on my tummy and Mr. Rai calls out for Saksham to come help me up. Without a word, he carries his weary self over and helps me up.

After the break, I feel slightly re-energized and I push my way toward the summit that’s just above my nose. I just keep pushing through. I think of the rest we’ll get at the summit.

But this time I collapse on the summit. It’s really uncomfortable but I can’t care less about sliding down or being uncomfortable. I lay next to Saksham and I feel my muscles loosening up.

I lie there as I observe the snow-clad mountains below us. One misstep and it feels like I might nearly end up on my deathbed.

I don’t exclaim. I’m too tired. But Faisal shouts, “Yay! We made it guys!!!” Saksham follows exuberantly and I wail, “Yay!” Mr. Rai sits slightly ahead of us with what I think is a proud grin plastered onto his face.

10 thoughts on “Finding friendship on the peak”