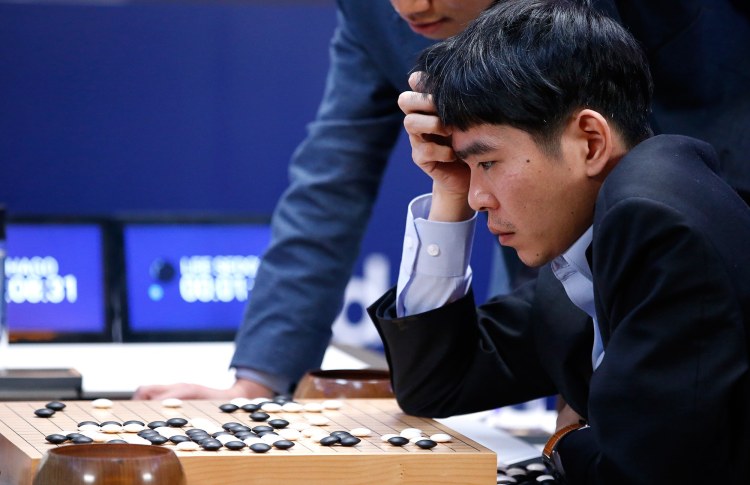 In the spring of 2016, social media went crazy when a South Korean Go master Lee Se-dol beat Artificial Intelligence (AI) AlphaGo at the board game Go after three straight losses. Although AlphaGo, the Google’s artificial intelligence computing program, eventually won the series 4-1, Lee Se-dol’s victory sent a wave of relief to people who were apprehensive about their future being overpowered by computers. It bolstered their confidence that humans are still superior to computers.

But are we really?

In reality, computers are already smarter than humans in various fields. However, it doesn’t mean that we should fear AI and compete against it. Instead, we should collaborate to make further advancements in the future.

AlphaGo is a computer program that uses machine learning to master Go, arguably the most complex board game ever. AlphaGo’s eventual 4-1 victory against Lee was historic progress for computer programmers and artificial intelligent scientists as no machine had previously beaten a top human player at Go. Although Lee’s one victory proposes that there is still room for improvement for AlphaGo, its recent undefeated match results suggest that it is drawing closer to perfection.

This confirms that there are certain fields where computers are simply better than humans. As we witness advances in computer technology day by day, the supremacy of computers’ outstanding intelligence becomes an undeniable truth. For example, an AI is faster and smarter than humans in visual recognition. Unlike humans, who struggle to remember all the names and faces of people they met in their lives, AI in social media such as Facebook automatically recognizes and identifies even the people whom they don’t recall meeting before.

What’s more, AI beat us in chess, Rubik’s cube, and even a reading comprehension test, implying that a computer is no longer a mere machine that does some addition or subtraction; it thinks, evaluates, and analyzes, even better than humans.

Some argue, however, that humans are still superior to AI as humans have creativity and intuition, both qualities that robots don’t have, or may never have. True, humans can write poems, compose songs, and create art pieces from their imaginations, unlike robots who can’t perform any of those tasks without human programming.

But then what’s wrong with that? If AI we programmed can produce better products, why don’t we collaborate further to yield even better results?

Tim Dunlop, a journalist for The Guardian, draws an analogy between slavery in ancient Greece to machine automation in the 21st century for the better understanding of the impact of AI. Just like slavery attended to day-to-day survival and enabled the citizens of ancient Greece to invent western civilization, AI will empower humans to excel with their full potential in this new era. Rather than the rise of AI signifying the inferiority of humans, it might actually suggest the beginning of human flourishing.

It’s already proven that AI with our programming can produce better, or even more creative products than humans’ through countless trials and simulations. For instance, in an online survey where members of the public were asked to judge paintings without knowing whom they were produced by, the paintings produced by AI were voted to be more complex, inspirational, and mood-lifting than those by humans.

Similarly, Russia’s internet company Yandex claims that Yandex.Autopoet, an algorithm that writes poems in reference to the styles of famous poets, is discovering its own voice and producing high-quality poems, which are soon to be published in its first collection of poems.

The collaboration between AI and humans provides brighter aspects for the future, especially that of younger generations. Elon Musk, the co-founder and former CEO of Tesla — a company renowned for its advance in autonomous cars — recently tweeted that Tesla’s Autopilot hardware 2.0 will be “2 or 3 times” safer than human drivers, reduce traffic congestion, and “encompass all modes of driving” by the end of 2019. In other words, younger generations might never be required to drive in the future, but instead, enjoy a safe, quick, and comfortable ride.

Moreover, in the future, AI might enable humans to no longer consider cancer as a fatal disease. International Business Machine (IBM’s) Watson, a question-answering supercomputer that is created from the combination of AI and sophisticated analytical software, can help humans take a leap, especially in medical fields as it can read and remember all the research in diseases, which no human could. “With deep learning, Watson can also solve a problem, for example, how to treat a rare form of cancer — and it has done so,” says the Professor Shlomo Maital, the head of Zvi Griliches Research Data Center at the Samuel Neaman Institute of Science and Technology. In fact, for the current young generation, cancer might be no more important than cold in the future.

Otherwise stated, we no longer need to exhaust ourselves driving, gathering research data, or doing repetitive tasks, because AI will do all of those mundane tasks for us. Our job, instead, is to apply the work done by AI to real use and enjoy the benefits of it.

After all, what’s to fear about AI beating humans at a board game? There’s so much more to gain by acknowledging that humans are no longer the smartest creature in the world. Remember, AI is designed to improve our lives, not to destroy. So instead of competing against AI, collaborate with it.

2 thoughts on “Instead of fearing AI, let’s make it work for us”