When one talks about India, one could be referring to Bollywood, the Golden Age under Akbar, where culture and knowledge flourished, the Taj Mahal, the British Raj, and so on. But the most fascinating part about this is that, in India, you could get a glimpse of its history anywhere you lay foot, from the monuments mindfully preserved to the artisans merely trying to earn their living.

On Oct. 8, a regular Sunday, the sun scorched down on the dusty pavements of Agra. Then out of the blue, a bunch of students — I couldn’t tell, they were of mixed ethnicities, some were white, some looked Indian, others Chinese? Japanese? — unloaded from a travel bus. The sweat glistened on their arms and they were grimacing as if something was physically tormenting them. “What could it be?” I wondered. The weather was so perfect for me that day; just the right amount of blazing sun felt beautiful on my dark, wrinkled skin.

The following day, they all seemed to be in a hurry, getting on the bus. I decided I should follow them. I do not know what impelled me, but I guess it was my curiosity or even distrust. I quickly embarked my horse Hero and followed the bus as fast as I could. The bus had come to a halt in front of a huge fort, which I recalled to be the Red Fort. Memories of coming here as a child faintly crossed my mind, and the beautifully detailed red walls gave me a sort of nostalgia.

The Agra Fort was built by the Mughal emperor Akbar in the 16th century. The detailed work of sandstone is even more breathtaking when viewed with its context; solely man-force was used in building this monument. 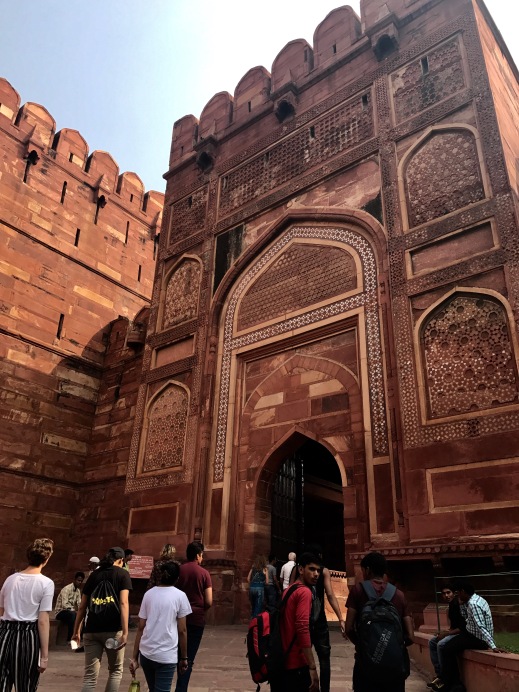 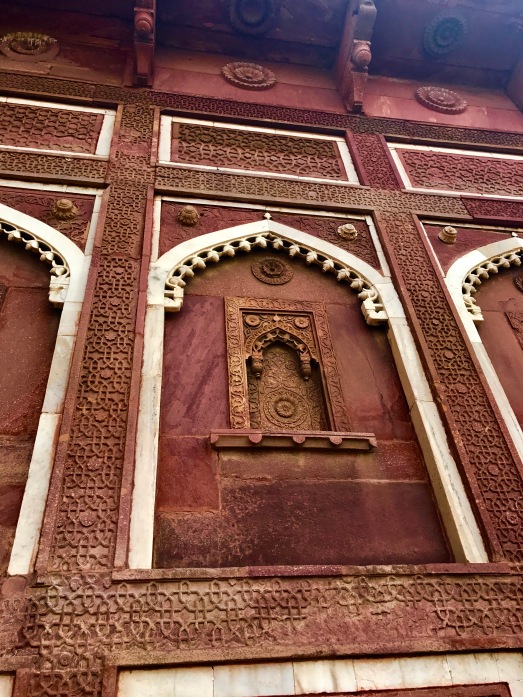 There’s a rather funny story behind the marble walls of the Red Fort. It largely constitutes buildings and domes made out of sandstone; however, a section is built out of white marble. While Akbar worked with sandstone, Shah Jahan (the builder of the Taj Mahal) worked with white marble. Shah Jahan came much after Akbar, therefore, Shah Jahan added buildings of marble to the original Red Fort, without any idea that it would end up being his own prison. His son, Aurangzeb, imprisoned him in order to gain power.

Akbar wanted the Red Fort to depict the idea of utopia, starting from excellent water systems to cool the fort down to the view of the vast spread of greenery allows us to guess where he is getting at.

After a solid three hours at the fort, the tired and panting kids hit the road again. And midway they switched onto auto rickshaws. I guess they’ve got to pass through a narrow alley. After trailing the rickshaws for a while, the roads started seeming very familiar. It was leading to my workplace, What could possibly be worth seeing in this part of town? It’s crowded and full of filth. It’s just a residential area.

The kids swarmed into my workplace and started greeting my coworkers and my bosses. What in the world is happening? So, I greeted them; they wanted to know more about my career.

So I introduced myself with pride. I am one of the few craftsmen who work with marble inlay today. This craft had been used to build the Taj Mahal and has been passed down from generation to generation. I carve the marble with patterns and then shape semi-precious stones to tiny pieces and fill up the pattern, creating a beautiful marble piece used for decorations. From the start to end, the whole process is done by hand. 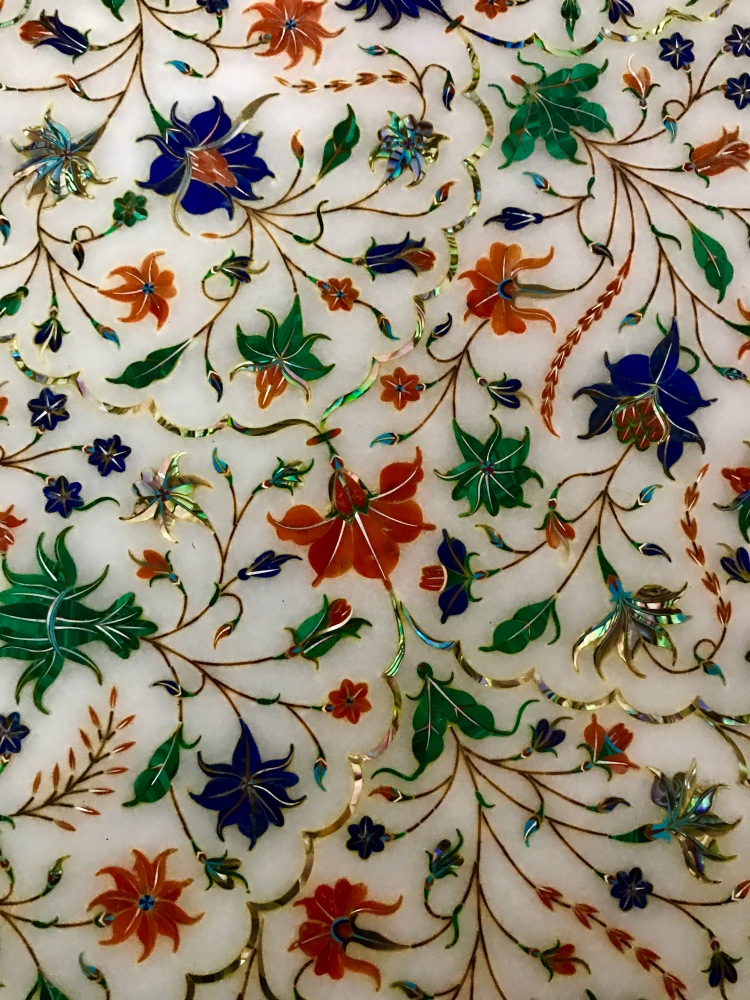 The business is dying as the demand is low and workers don’t earn much money. Even though a piece ranges from one to twelve lakh rupees, the company takes most of the money.

The rise in the capitalist economy has made it impossible for individual artisans to succeed; therefore, the system in which the craftsmen earn money has completely changed. However, ironically, the techniques used for making these detailed art-pieces are the same techniques used in the 17th century.

This is how I became their travel guide. And after taking the rest of the day off, we were up and hitting the roads at nine. We were at Sikandra at no time. Sikandra is where the Mughal Emperor and cultural leader, Akbar, was buried around 1613.

The beautiful patterns are not just for design, several patterns have its hidden meaning. There are Sutras incorporated in the pattern to symbolize Hinduism, stars to symbolize Judaism and so on, all to glorify Akbar’s pioneering rule involving religious tolerance. Even under the withering heat, many eyes glistened with admiration. Or maybe it was the sun, I couldn’t tell. 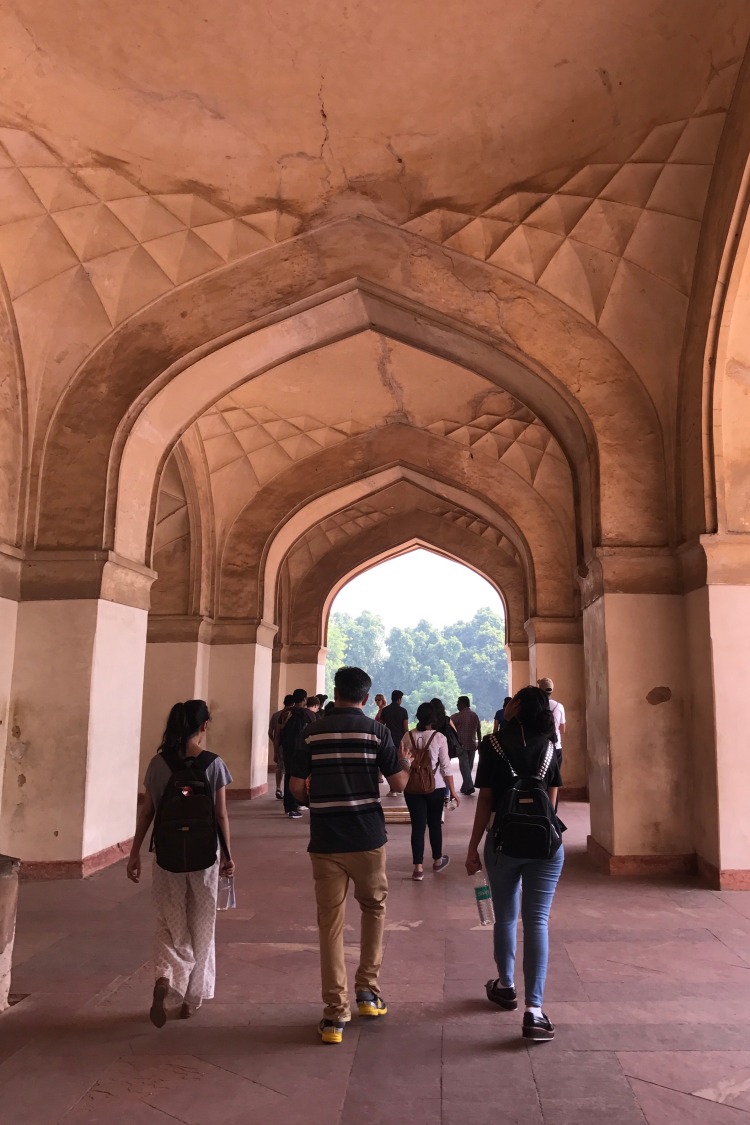 Not only was the outside decorated with abundant care, but also, the inside of the domes did not go neglected. Each dome had a different pattern carved on the inside, making them all unique. It mostly comprised of simple shapes made out of several straight or slightly curved lines, however, these simple lines added up to a masterpiece.

Our next destination was the tomb of Itimad ud Daulah. Many recognize this as the “Baby Taj,” but it has nothing to do with Shah Jahan, or the Taj Mahal itself.

The tomb overlooks the Yamuna river, exemplifying its beauty.

After we had seen the so-called “Baby Taj,” I decided that the Taj Mahal should be next tomb we visit. It was the tomb the students were most familiar with. Students were awe-struck and were gawking at its sight, which only reminded me of their lack of reactions to the other tombs. I felt that the cause of their reactions was probably due to its publicity.

I can not argue with the fact that the Taj Mahal is beautiful, with a heart-wrenching story behind it. But, at the same time, I couldn’t help but notice how much influence the media had. The other tombs were as beautiful if not more so than the Taj Mahal. And each carried its own atmosphere, different tombs making me feel mystified, awestruck, and even comfortable. However, due to the sheer overwhelming numbers of tourists visiting the Taj Mahal, it failed to convey such emotions or even comfort to me, and it lost its mystical side.

The Taj Mahal was built by Shah Jahan for his wife Mumtaz Mahal. Therefore, the dome is shaped like a teardrop, depicting his sorrow.

I, then finally led the group to Delhi to visit the last (but not least) tomb; Humayun’s tomb.

This tomb was the most unique out of all the ones we had visited. The walls, the building felt like it hadn’t touched since it had been built in 1572. It was as if it carried history with it, all the days that have past since then, just embedded in the building itself, perhaps because it was the oldest tomb we had gone to.

It gave off a serene vibe due to its majestic gardens. I think the surroundings of the tomb, the palm trees, the neatly trimmed grass and everything else around really contributed to this atmosphere.

The whole tomb was like a peaceful tropical island in the middle of Delhi’s commotion. I guess that is why many end up coming back to the tomb. It is very different from your typical tourist destination, not simply one to be ticked off the bucket list. 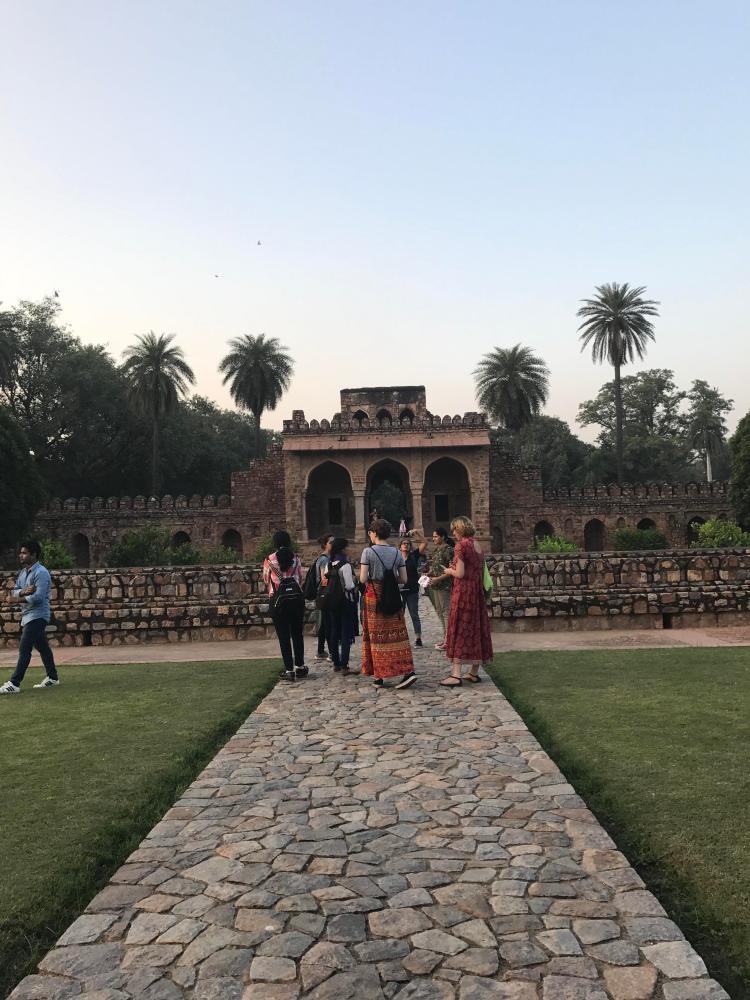 Mostly, we live our lives oblivious of the stories behind objects, buildings, and even people. And we are so prone to forget the importance of anything beyond our senses, deceiving ourselves that nothing but what’s perceived and is alive is of importance. Therefore, it was rejuvenating to experience the mix of modern and ancient, existing in the same century, again.