Woodstock is known for its diversity, and with all sorts of talent running around the corridors, it’s easy to ignore and forget the value of some special Woodstockers such as the national level sports stars.  These special students go to classes, walk around with earphones plugged in, and chill at Cozy Corner. However, they have inspirational stories to tell. At school, they join sports teams and compete in the many year-round competitions to develop their skills and win as much as they can for the team.

Ansh Vora, class of 2019, was inspired by his mom in fourth grade. Back in Mumbai he “trained with professional coaches for both the game and fitness aspects of squash.” Training was arduous and Vora trained for three years before he could participate at the national level in India.

“I love the sport, it’s a great stress buster for me,” said Vora, believing Woodstock can further help develop his skills.

“The coach, Mr. TerHaar, is a nice coach,” said Vora, but unfortunately, at Woodstock squash is “not much of a big thing.”

“The school should organize more matches, tournaments and should definitely get a better court, that is only used for playing squash,” said Vora, when asked about how the school can help him improve at squash.

Another sports star at school is the footballer Diya Singh, class of 2019. She has represented Woodstock on many occasions abroad at the national level such as the Dana Cup, hosted in Denmark. Originally, Singh said she started “kicking a football around the house,”  before she developed her skills and reached the level she is at now.

Singh is now a member of the senior girls team and has a lot to say about football at a personal level and school level.

“Football teaches me a lot about life and myself, you have to work hard and be prepared to play well,” Singh said.

“We have a great coach at school,” said Singh, “and through hard work, we do win tournaments. We’re a big team, and I hope we can attract more players to play with us.”

When asked about how her school helps her develop as a footballer, Singh replied, “The opportunities we get at Woodstock, such as tournaments, give me a lot of experience and they show me what my level is and help me improve further.”

Furthermore, Singh wants to “represent school abroad and win lots of tournaments” (Singh) help her school reach new heights. In fact, when it comes to sports education amongst Indian schools, Woodstock is ranked second place in India with a total score of 92 out of 100, as of 2017, according to educationworld.in*.  Diya hopes that her school can keep improving to develop more football players by “getting a better football field” which will attract future players to come.

Similar are the hopes of a basketball player, Remay Pemba, class of 2020, whose mom and aunt were basketball players at Woodstock.  Pemba started playing Basketball in New York back in sixth grade and joined two Amateur Athletic Union (AAU) teams to get to the level she is at now.  At school, she plays at state-level but did not participate at the national level to represent Woodstock.

“I like playing at Woodstock. It inspires me to look back at how my mom and aunt played here, I’m really proud to represent Woodstock”, said Pemba, who also wants to win the all-India basketball tournament, Win Mumby, which is held in the Win Mumby Gymnasium every year.

Pemba also believes that the atmosphere at school is great for her sport and her development.

“Our coach, is really inspirational and pushes me to work hard and so does the team,” said Pemba.

However, Pemba hopes that she can get more time to focus on developing her skills such as shooting and “gets to play in other tournaments too, (Pemba).” 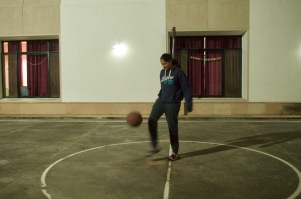 Abdul Malik Ansari, Class of 2019, joined Woodstock in 2010 and has been a member of the Woodstocker since 2017. His passions are to follow his dreams, watch and play football. He prefers not to have any free time. View all posts by Abdul Malik Ansari