“I am Christian and I am a minority in India,” said Ms. Shonila Chander, who taught religion and economics at Woodstock for 34 years before she retired last year.

On Thursday, August 4, she gave a talk at the Center for Imagination on minorities in India. Ms. Chander gave her thoughts on religion, the quota system, gender inequality and gay rights in India.

Although she taught religion for a long part of her career, she “never tried to convince students that Christianity is superior.”

In India, there is a deep-rooted quota system through which certain seats in educational institutes are reserved for people based on caste and religion. The system aims to provide better opportunities for minorities.

In spite of being a minority herself, Ms. Chander is against the quota system.

“My stand on the quota is that I am against it. As a minority, I am against it,” Ms. Chander said. She believes that the fact that the quota system still exists more than 70 years after the Indian independence reveals that “we have not given equal opportunities to people” and that “there must be something wrong with the system.”

Ms. Chander and her sister went to a college on a national scholarship without the quota system.

She said, “If you work hard, you can achieve anything without quota, which why I managed to get a national scholarship.” 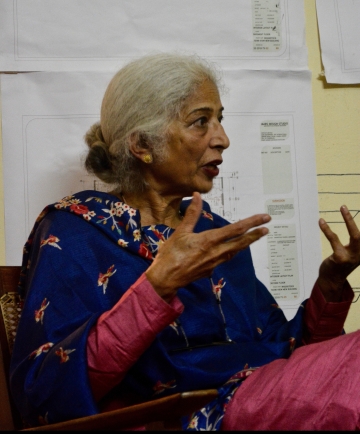 Indian society still struggles to abolish the caste system and the prejudice that comes with it, despite it being illegal.

Ms. Chander thinks that the prejudices are so deeply ingrained into society that it is unrealistic to completely eliminate them.

“There are Doctors who are very qualified who come from a low caste, but the problem with the system is that we put a tag on people,” she said. “ ‘The president is low caste, the prime minister is from a backwards caste’ so people don’t want to forget where they belong. This will never fix the class and caste system.”

“People always want to mention the background of a person, like when the news came out that Indira Gandhi [Former Prime Minister] was shot, they said ‘Sikh bodyguard,’ ” she said. “Why couldn’t they just say ‘bodyguard?’ ”

The assassination of Indira Gandhi caused large uproar against Sikhs, causing even more religious tension. This is why Ms. Chander believes that “secularism is excellent for us.”

There was a recent bill that would prevent a politicians religious background to be revealed. Ms. Chander believes is “an excellent idea,” but the Indian National Congress ended up rejecting the bill.

Ms. Chander, a Christian, is often perceived as a Sikh woman due to her background and name.

“I think the name should not reflect a person’s background,” she said. “People always think I am a Sikh woman, and my father kept his name as Gurbaksh Singh. He never became Andrew or John.”

One moment in her life that impacted her deeply was in 1992, when Omar Ahmed, a Muslim student from the Class of 1992, wrote a poem about the Babri Mosque being demolished by Hindu extremists.

“He recited this beautiful poem and he performed in the Quad, everyone was there, everyone was crying,” she said. “That really got me thinking that if this young boy has this approach on religion, why can’t older people?”

Although she was raised in a religious and conservative environment, Ms. Chander supports LGBTQ+ rights.

“I’m nobody to condemn anybody’s sexuality. I accept whoever for who they are,” she said.

She further explained how Punjabis are “big-hearted people” and how the first gay rights procession in India was held by a Punjabi lady.

She also expressed her concern for the treatment of LGBTQ children.

She said, “It is so sad how some people try to change their children because of their sexualities. I would love to help people understand it is how they are.”

She concluded her talk with advice on how to handle a situation when one is being discriminated against by telling a story from her younger years.

She said, “I was once interviewing people on someone’s thesis on Sikhism while I had chai with them. They must have thought I was a Sikh woman so they told me that they treat Christians differently and that they keep different cups for them and different dishes for them. And these people were teachers.”

A smile crept up on her face as she remembered the incident.

“While I was going to their school, I asked, ‘May I take my cup with me?’ They asked me why I was asking them and I told them that I was a Christian,” she said. “They were shocked and apologetic and said ‘You don’t look like a Christian.’ ”

One thought on “Ms. Chander gives talk on minorities in India”