Living a life without regrets is a very tough task, but Ms. Subhashini Timothy, one of the oldest staff members at Woodstock, claims to have successfully accomplished this.

“What I want, I have. God has blessed me in life, except for a home, which I hope I will get some day. I am a very satisfied person,” she said.

Coming from a Brahmin family who later converted into Orthodox Christians, Ms. Timothy grew up in an environment where receiving an education was sometimes impossible for a child.

However, she gained a lot of support from her father, who strongly believed in making girls receive appropriate schooling.

“My father was the most influential person in my childhood. After his death, my math teacher became a great influence,” Ms. Timothy said as she talked about her childhood memories.

Not many would call their life in a strict boarding school fun, but Ms. Timothy misses her time in Burgess Memorial Girls Higher Secondary School the most.

It was an Orthodox Christian school which was built on several principles and followed certain guidelines to ensure its students’ welfare. Back in Ms. Timothy’s time, students were restrained from going up to the roof, but she confessed to breaking this rule.

She said, “We were not allowed to run on the rooftop or go up but we used to when everybody had gone to bed.”

Till date, she recalls her boarding life; the friendships she built and the time she spent with all the people of the community.

“I remember my sister and I [fooled] our math teacher in sixth grade,” Ms. Timothy said, with a smile on her face.

Being a librarian wasn’t the career she chose.

“I always wanted to be a Hindi teacher, but it never worked out,” she said.

At the age of twenty, she got her first job as a math, social science, and geography teacher in a school in Rajasthan. She worked there for about a year and a half before moving to Singapore with her husband and daughter. The church there requested her to help in a library. Gradually this volunteering became regular.

However, this journey ended after four years when she returned to Dehradun, India.

While searching for a school that would be appropriate for her daughter, Ms. Timothy came across Woodstock. “If it wasn’t for my daughter, I would definitely not be here,” she said.

Her daughter’s schooling led her to move to Mussoorie. In 1990 as a hillside parent, she became a member of the school and was often called to either help in the library or substitute for an absent teacher.

Soon after she was asked to become a regular member.

“In 1994, Mr. Don Homes called me. He [asked me if] I would like to come and help in the library. From then till 2000 I worked full time from Monday to Friday. I wasn’t given any salary. The school only gave me meals. I was still like a volunteer,” she said.

In the year 2000, Mr. David Jeffery, Woodstock’s former principal, invited Ms. Timothy to become an official contract holder. She has been working here ever since.

Woodstock has become an enormous part of Ms. Timothy’s life. After spending almost twenty-eight years in the school, she has no intentions to leave anytime soon.

“I will only leave Woodstock if [the school] asks me to. It has become a part of my life. You young children are my life. I am in a place where I am surrounded by young kids and we want to mold you in the right way,” she said.

Ms. Timothy’s job is not easy in the Woodstock library. “My day is very packed. It begins by choosing books for the library, ordering them, compiling other materials, and constantly checking on the students. I also have to be prepared to reply to people’s inquiries,” she said.

As a member of the community for the past twenty- eight years, Ms. Timothy appears as a motherly figure to many students around the campus.

“Ms. Timothy is almost like my grandmother. I talk to her more than I talk to my grandmother. I usually come up to school early and she offers me nuts. She is just really comforting. I became close to her last semester because of my study halls and now I tell her more things than I tell my own friends. She is a dorm parent in school,” said Joanna, Class of 2020.

Agreeing with this, Aditi, Class of 2020 added “I can talk to Ms. Timothy about anything. She is like a really close friend. Whenever I walk into the library, her presence makes me feel really comfortable.”

To show their affection, many students make cards for Ms. Timothy and place them under her glass desk. 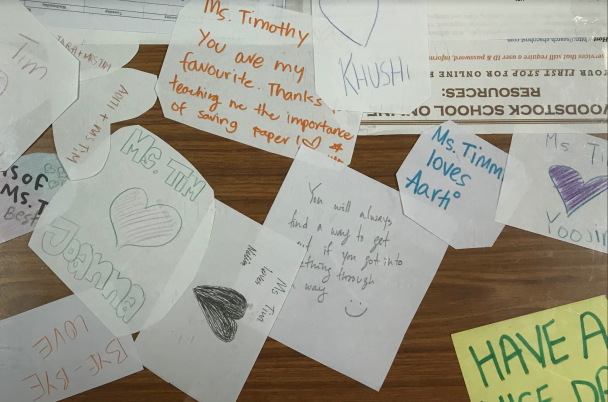 With all the love Ms. Timothy has for the school, there are a few things she wishes hadn’t changed.

“Nowadays, kids time is taken by technology and so much educational stress. We were very illiterate with technology, so whatever resources were there were very limited, but because of that, we all used to play together and have fun outside. Now the children are maturing quickly because of all these resources. I wish they enjoyed their childhood as we did,” she said.

Above all, Ms. Timothy hopes that the students at Woodstock become caring, helpful, and compassionate people.

“I want the children to become responsible and go out of their way to help each other,” she said.

Like many students here at Woodstock, one thing Ms. Timothy relishes the most is traveling.

“I have enjoyed all my travels. All were unique experiences and different places different experiences,” she said. She wishes to go to Israel at least once.

While talking about her life at Woodstock, Ms. Timothy recalled the 9th-grade Activity Week that she was a part of a couple of years ago.

As the week went by, another tragedy came along the way.

“There was a student whose boyfriend was in another village. So, this boy hired one of [the] local guys and asked him to chaperone him to [our] village.

“At about 12 o’clock, I could hear noises in the tent. I knew this was not someone from our group because I had seen them grow up.

“Later I found out that he had bribed the man with two bidis. Just for that this man made him cross the river and brought him to the other side!” she said.

Ms. Timothy believes that no one is perfect. She wants to spread this message around the community.

“Everyday we learn. I am still learning to be a good person. None of us are perfect. We try to be. In the Bible, it is written, ‘I am like a child right now and when I see into the mirror, it’s not clear, but the day will come when it is clearer,'” she said.

“This is my belief.”

One thought on “Everybody’s favorite, Ms. Timothy has no regrets”