“Some people just trap themselves by looking into their phones or listening to music,” Rohan Menezes, Class of 2019, the founder of the student committee of the Mussoorie Mountain Festival, said.

That statement stays true to many of us. Winter or summer, on the walk up to school, music has accompanied us through shivers and sweat. Our phones too, unless the path is too bumpy, tend to hold our hands as we walk. Staying close to our hearts, oftentimes, they invade the relationship between nature and us.

This was what the 2019 Mussoorie Mountain Festival, that was held from March 7-9, tried to dissuade us from doing so. In this annual event that has grown as part of the school’s tradition, a group of students, including Menezes, Faisal Qadir, Class of 2019, Daeyoung Kim, Class of 2019, Chimmi Selden, Class of 2019, Dori Hardage, Class of 2019, came together to establish a bridge between the student body and Mussoorie’s natural environment.

Qadir said, “We live in an amazing environment and we have a lot of abundance because of that.” Yet people ignore these trees that have been standing for decades, the “beautiful vegetation, and amazing views on the mountainside,” for an electrical screen, Menezes mentioned.

Opposed to the popular opinion, this team expressed their love for the outdoors. Selden said that her adventurous nature led her to this path. To her, mountaineering is “exposing [herself] to something outside, having fun,” and trying to explore new things.

Kim said, “It’s something that I pursue as a passion.” Initially, Kim actively practiced rock climbing. However, as he started to put interest in other outdoor activities such as hiking and camping, he slowly emerged into the field of mountaineering, as he fell in love with outdoors and mountaineering in general.

For Hardage, too, nature has been something that has pushed her “out of [her] comfort zone,” or simply a serene escape away from school.

Qadir too, said that he is on a different peak every weekend and pushes himself out of his bed to do what he wants, however simply “doesn’t know why.”

To Menezes, nature and outdoors has been “an opportunity” and a privilege which the rest of the world does not get. 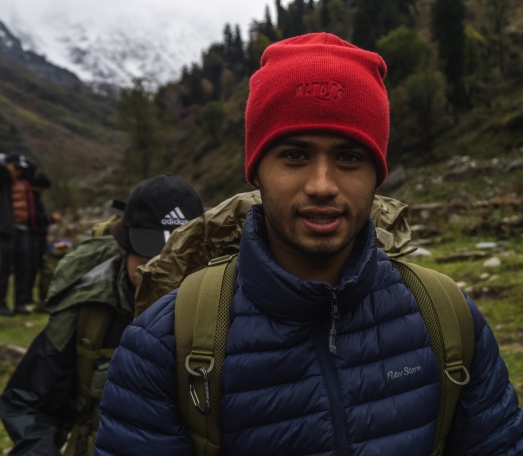 Yet, despite their love and passion towards nature and outdoors, the annual Mussoorie Mountain Festival has not been an awaited event for them.

We’re all in this together

“I knew that this was one of the most boring things that I have ever heard,” Menezes said.

Kim too, said how he did not really like it despite his passion for the outdoors because the speakers were very boring. “You have two choices. You can either be like ‘it sucks, I don’t want to go, I don’t want to do this,’ or, ‘next year, we’re going to make this better,’” Kim said.

After listening to several talks that did not impress nor interest during the‘18 MMF, Kim and Menezes talked to Mr. K. Krishna Kutty, the Executive Director of the Hanifl Center. Mr. Kutti delightedly suggested that they should help organize the following Mountain Festival in 2019. In July of the same year, Menezes went on a search for teammates with Kim.

“Bro I’m in,” was what Qadir said when he was explaining his reaction after hearing Menezes talk about planning to start a student committee. “It [Mussoorie Mountain Festival] was my first time last year, and it was boring as hell. Even for a person like me who loves the outdoors,” Qadir said. He later elaborated on the reason to why he joined as a hoped to make the event more “relevant for the students as well.” In a search for a female student to join the committee, the boys asked Hardage and Selden to join. Sharing mutual thoughts and feelings, Selden unhesitantly joined the crew, also hoping to work behind the scenes and “try out new things.” However, Hardage was held back since she had a tight schedule. It was not until she had ruminated and realized that it would rather be better to be able to “have a say about what went on,” and bring about a change. With determination, their aspiration towards bringing about a change was finally put to action in the ‘19 Mussoorie Mountain Festival.

This was easier said than done.

The mountains of struggle ahead

“They[Menezes and Saksham Basu, Class of 2019] would argue so much, they would go round and round,” Hardage said. Before the external process of presenting ideas and convincing people to take part, the clashes began internally. Yet the greatest wall they had to conquer was “school issues,” Kim said.

Many of the desired outcomes had to be discussed with Ms. Renee Bowling, Upper Years Coordinator, and Mr. Ethan vanDrunen, Vice Principal. After discussions and attempting to get approvals of their proposals, they were involved in the scheduling of the event: required sessions for students, the grade which will be required to attend, places which will be occupied for sessions, and when, where, what will happen.

The part where they had to get approvals from the school was the greatest hardship they faced according to Menezes. This was because the student committee was responsible for “getting them[administration] to understand” why they need what they need, for instance, a day off for the whole MMF. Nonetheless, with the numerous other events that the administration had to commit to as during the second semester, they were not able to give the student committee what they needed for the festival.

Other than looking through the nitty-gritty bits of organizing — inviting the speakers, arranging their accommodation, how the students are going to be involved, advertising about it — the student body itself was also an increasing concern to them.

A lot of students had tests and assignments on the next day from the opening of the festival, diminishing the number of attendance to the opening screening and the concert. As Menezes said, “students have so much going on, it’s so hard to put your head fixed onto only one even.”

Which was why, as Hardage said, they changed the speakers to “more interesting” people who“had given a good talk before.” Moreover, Selden said that they favored younger speakers to minimize the age gap and make the talks more relatable.

“We’re going to make this better”

The student committee knew that students often snoozed out during the sessions due to boredom, thus, as Qadir said, the process was about “making peace with what this whole thing really is.” In other words, the purpose of having a process which had student inputs was to dissolve any possible obstacle of boredom to make peace between the students and the event.

Kim said, as the student committee was the student input of “what the students will think of when there is some kind of event in the mountain festival,” the team made a thorough attempt to answer the following questions:

Other than that, they had to organize the vendors, choose the band, screen all films, talk about speakers to invite, play around with the schedule, and design many merchandized items and items which would be used as part of the event: t-shirts, bags, and name tags.

As the people in the Hanifl center did not know the school, nor the student life here, Kim said, “being in a committee helped a lot in deciding things.” 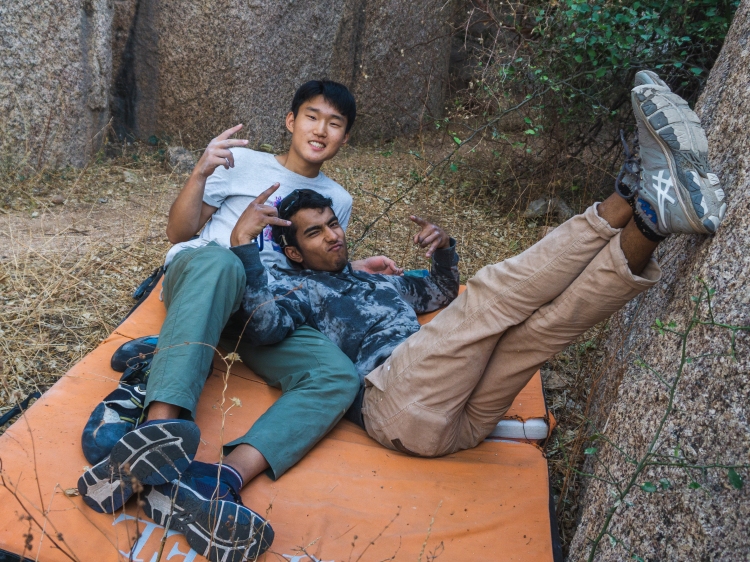 And Ms. Nandini Kumar, Social Media and Marketing Consultant of Hanifl Center, strongly agree with that. According to Ms. Kumar, the students were a “source of fresh ideas and different perspective” for the Hanifl team. The student committee “brought their own thinking, their special characteristic into the conversation which eventually made the festival more wholesome,” Ms. Kumar said.

“Without them, the festival wouldn’t have been the same, ”she added.

Messages beyond the speakers

Initially, as Hardage said, they wanted to give a subtle push to the students so that they could “learn to appreciate the uniqueness of the setting” of the school. However, beyond the messages that the speakers attempted to convey, the student committee also desired to convey a couple of lessons. 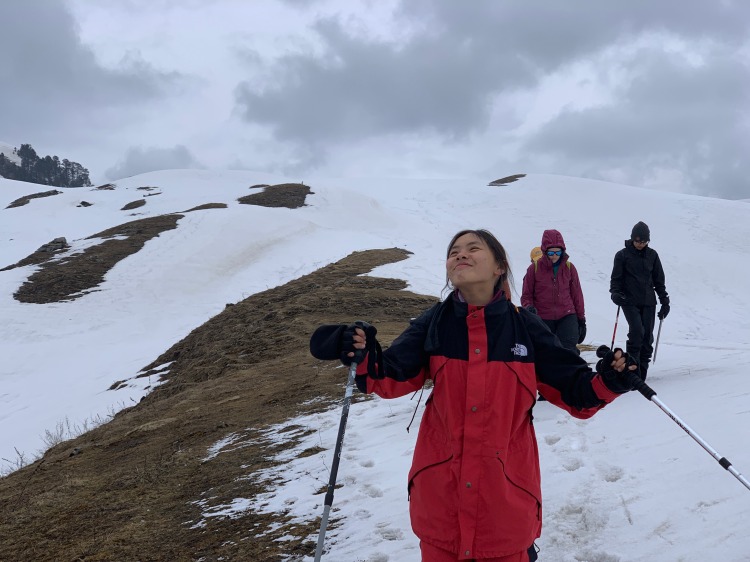 After Selden made the assembly announcement regarding the MMF and sat on the bleachers, the first thing that she heard was, “why do we even have a mountain festival?” With that type of pessimistic attitude towards the whole event, Selden said, “you won’t like anything. So don’t be so negative about it.”

This is also because there could be timeless value in the talks. Moreover, through truly experiencing the MMF, the significance of the nature that withholds us can be revealed.

“Humans are part of our environment and it’s important to note that India, in particular, has a profoundly beautiful natural environment,” Menezes said.

As he suggests, in the core of Indian culture, we, as humans are deeply connected to the environment and nature. However, tragically, the opportunity for us to truly embed ourselves and connect with it is going extinct due to the environmental destruction. With a system moduled in a way that it is run in an unsustainable way, Menezes said, “Over time with westernization, we have been losing significant parts of our nature.” Which is why “we are in a very privileged position in that way.”

“The outdoors is just like compensation for what we miss living in an urbanized area,” Qadir said.

He describes that the time spent in the outdoors allows you to be detached from chaos, and instead be at peace and solitude. Perhaps that is why Hardage expressed how she hopes that students will learn to see their “surroundings as more than a school but the greater Mussoorie area.” 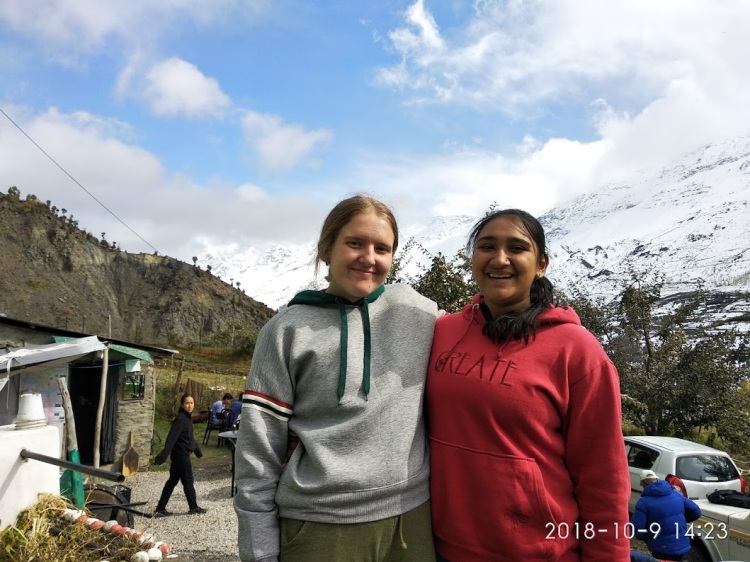 Author’s note: The Mussoorie Mountain Festival student committee expressed to give notice and thank the Hanifl Center, the AV crew, and all the speakers who visited, for cooperating with them.

Victoria Lee is the 1st Person editor of The Woodstocker