Two pairs of white eyes illuminated in the darkness merely 20 meters away from our campsite. Its eyes prompted horrified faces and shrieks of fear from some of my friends and I. We began to hear growling noises, but it didn’t come from the side of the beach where we saw the white eyes. Eventually, we located where the growling noises were coming from and we noticed another pair of white eyes. Our rafting guide, Mr. Vikram, one of the three guides for our river rafting expedition, had told us that these were the eyes of two leopard cubs and their mother.

“It’s okay, she won’t hurt you. She’s just waiting to see if it is safe for her cubs if they won’t be in danger. Just don’t attract any unwanted attention, ” Mr. Vikram whispered.

This was day one of our action-packed river rafting expedition that started in Alaknanda, a tributary that flows into the Ganges river, to the sacred town of Rishikesh.

For the rest of our rafting trip, we encountered different rapids with different difficulties. Rapids are sorted into different grades as per the international scale of river difficulty. The rapids we encountered on our trip were ranged from grades one to four. Grade one rapids consist of small, easy, waves. Whereas, grade four rapids were difficult and powerful waves, where rafting guides usually have to figure out special pathways to enter rapids so that the raft doesn’t flip over. Our most memorable rapids on the trip were all grade three and grade four rapids, which include “the clubhouse,” “the wall,” and “three blind mice.”

Furthermore, along with rafting, we also had the chance to do some cliff jumping. This was definitely the most exhilarating part of the trip and is where many faced their fears of heights. We had the opportunity of jumping from three different rocks with heights of 3 meters, 7 meters, and 10 meters respectively. From our group of 13 students, only 2 students didn’t jump from one of these rocks. As someone who has already done cliff jumping, I wanted to challenge myself and jump from the 10-meter rock. When I stepped on the edge of the rock, I looked down, perhaps for too long, and slipped, barely missing another rock right below me. It was a scary experience, but one that I am happy to have.

On the last night of our rafting trip, we went to see the Ganga aarti, a ritual that uses fire as an offering, in Rishikesh. As the sun sets, the ritual is performed; small ideas with candles and flowers are floated down to the river as an offering to Goddess Ganga, goddess of the holiest river. Before the diyas are sent down the river, devotees circle the diyas clockwise to acquire power and blessings from the goddess. While the diya is circled and passed around hundreds of devotees, the pandits chant mantras clang bells to create such a spiritual experience. Even as someone who is not religious, the ritual was a very powerful one. The diversity of the devotees, ranging from pandits and babas to any ordinary citizen, reminded me of the power of religion, and its ability to unify everyone. 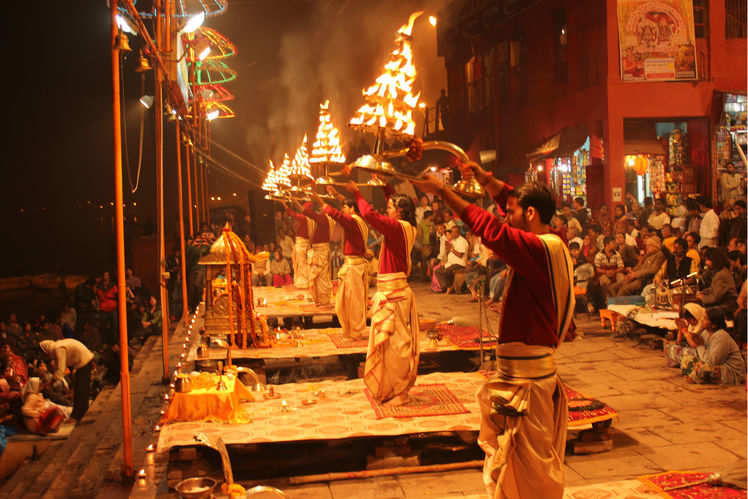 The trip meant more to me than the other rafting trips I went to in sixth grade and eighth grade; it meant more than challenge and adventure. Listening to frightening leopard stories, eating warm Maggi, spending our evenings staring at the bright sky, and deep conversations with my peers made the activity week the most memorable one in nine years.

Ryan Bajaj is a staff reporter for The Woodstocker