However, there were many other awards given to teams and individuals for their outstanding contributions during the tournament, which ended on Sept. 2. The sportsmanship award, given to the team with the best behaviour on court, was given to the girls’ team We Just Got Messi and the boys’ Nice Guys.

This joyful award ceremony, however, wasn’t a celebration for many teams. Surprisingly, not all the members of the winning teams were jolly either.

From the girls’ pool, Mama’s Misfits, the staff team had won. They had beat Unreal Madrid by just 1 goal. Unreal Madrid, consisting of girls of the senior class, Class of 2018, were determined to win this year, there was an uproar of cheer from their fellow classmates with the same kind of determination. However, hope seemed to diminish when Mama’s Misfits scored 3 goals, while Unreal Madrid had only 1 goal until the last minute. But, leaving only about a minute on the clock, the crowd went frantic due to another goal scored by Unreal Madrid. This ray of hope was, however, soon covered by cloudy skies, losing by the score of 3-2.

This was a quite a devastating loss as it “was such a close game,” said Tshokey Gyaltshen, Class of 2018. She explained, “I knew we could have won but we got really unlucky also,” adding to this she said, “We’ve come second like twice now so we really wanted to come first this year because like senior class and everything and last Goal-a-thon.”

Unreal Madrid did not deal with the loss very well, “For a lot of people like Sophie and all, it really hit them hard as we’ve been playing Goal-a-thon since like ninth grade.” said Gyaltshen. A lot of the members of the team were spotted crying after the rigorous match.

But surprisingly, Mama’s Misfits weren’t all jolly either,  Mrs. Kirsten Pike, the main scorer of Mama’s Misfits, said that she felt “not good,” as many of the students “I cared about so much were sad, because of the result.” She confessed, “I didn’t want to win,” as “the win would have been so much more [meaningful] to so many other people.” She had discreetly hoped the score to end up to be “three to three” so that the penalty kicks would take place, which “would have been a better ending,” she said.

Despite the remorse, Mrs. Pike said, “Getting to play football against these really impressive tough, young, female athletes” was the best part of goal-a-thon and she is “so proud of all of them,” which makes her want to “play more football with them.”

The winners of the guys’ pool, Cuddle Crew, were not all exuberant either. Cuddle Crew won against Double Dab by 2-0. The fact that both teams being from the Class of 2018 intensified tensions and ill-feelings for both the winning and losing teams.

Yonghoon Chung, Class of 2018, a player on the Cuddle Crew, expressed his uneasiness on winning the match against his own grade. He said, “It was kinda bad,” especially because he had switched “from Double Dab to Cuddle Crew to win.” He had played for Double Dab last year, but, as most people would, he wanted to win in his senior year. So, he said, as soon as he “saw the list of the teams and groups, I saw this easy game and I moved.”

But this wasn’t the only downside of the final match. He said, “There was no [strong] support from our grade,” as people were quite confused which team to support as both were from the Class of 2018.

However, this feeling of guilt and uneasiness was soon taken over by the recollection of their wins. He said, “Our games were like 6-0, 12-0, 13-1. It was easy, I scored 4, it’s been 2 years that I haven’t scored so it was kinda special for me.”

Not everyone was focused on winning.

Gyaltshen thought the final boys’ match represented “the real Goal-a-thon.” Cuddle Crew wanted to win, “but Double Dab basically wanted to play more for fun so like it was a like a friendly game,” she said, implying that the true essence of Goal-a-thon is having fun. She said, “I think it was a really fun game to watch and I didn’t feel conflicted over with who to cheer for because I was just cheering for my grade in general.”

The winner of the sportsmanship award, Nice Guys, living up to their name, stayed positive throughout the tournament. Even though they were knocked out in the semis against the Cuddle Crew by the score 3-0, they did not take the defeat to heart.

Tenzin Dorjee Nepali, Class of 2019, said, “We were kind of like a troll team so we went to the semis so we were happy about that already.” This positive attitude got them the sportsmanship award. He said that they “played fair” and they “didn’t fight against other teams.”

In the girls’ pool, We Just Got Messi received the sportsmanship award. They played fair and generously when they were winning by several goals, but played tough during the harder matches.

Parth Parikh, Class of 2018, the winner of the Golden Boot, said, “I knew how many goals I had,” and as the award is given to the most scored player,  he had anticipated getting the award. He said, “I was very happy because it was one of my goals since seventh grade,” however, this was his second time winning the award, the last one won was “last to last year.” He admitted that he was working towards the award. 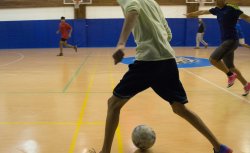