This year, a group of 15 Grade 11 students signed up for a 4-day camel safari near the Golden City Jaisalmer, Rajasthan. Because Jaisalmer is situated very close to the India-Pakistan border, the first part of this adventure was a long journey— during which we went from sitting in a bus on Tehri Road to sitting on a camel’s back somewhere in the Thar desert. 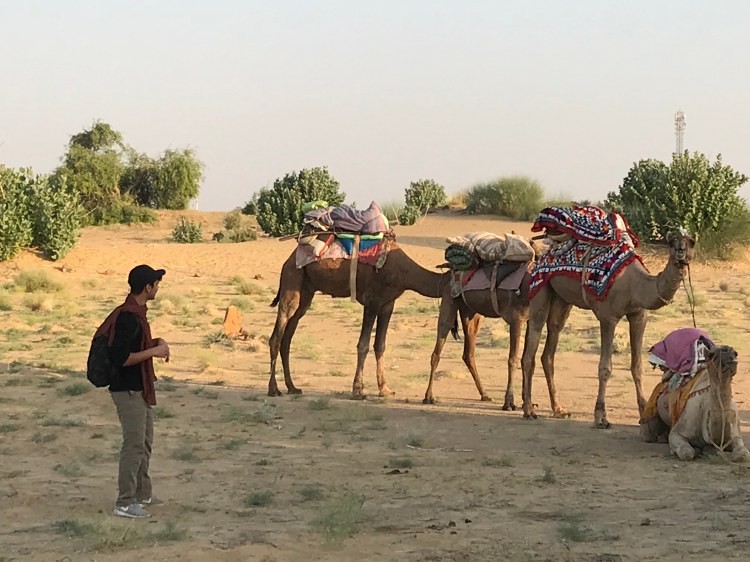 If you’ve ever been in a Indian train, you’ll know that that’s quite an adventure by itself. “Chai, coffee! Garam chai, coffee!” These were the words we woke up to the next morning. There were two guys demanding the passengers to buy a drink for them.

Twenty-four hours later, we drove to the desert in jeeps and ate breakfast as we waited for the camels. This was our first encounter with the creatures as they arrived and rested, before their long journey in the desert.

The first time I met my camel Babloo, the name made me a laugh quite a bit, as it is my father’s childhood nickname. 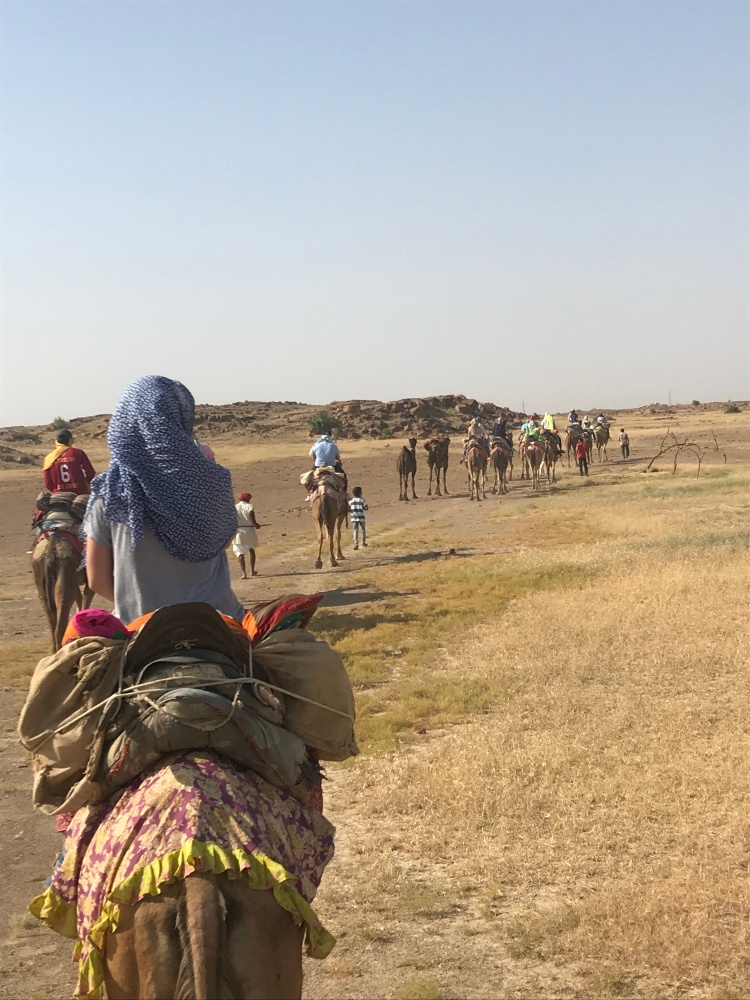 The guides wasted no time and started walking deeper into the desert as soon as we got on to the camels. The only instructions we received were to hold on and lean back as the camel stood up, which was done in the most unique way possible. As I took this picture, I was also adjusting my posture to achieve some comfort on Babloo’s saddle.

About twenty camels travelled with our group for the safari, and by the end we knew most of their names pretty well. Since it was mating season, all the camels were males because if a female was present, they would fight over her and it would be too chaotic.

One thing that I found surprising was that some of the camels were somewhat incompatible with each other. For example, Babloo could only trek with his brother Jabloo. The camels followed a guide, who navigated the frontmost camel using a rope. The camels behind the leader were attached by a rope to each other and behaved almost exactly the same as their predecessor. However, when I asked the guide if we could ride with other friends of ours, he said it was not possible and that the camels might not listen to the guides if they let that happen.

Some of the camels were well behaved, while some of them were a bit overexcited. This particular one, named Gajju, was the youngest camel in the caravan, but his behaviour was so erratic that the guides didn’t trust him enough to let anybody ride on him. Our group nicknamed this camel the “toddler” and he was everyone’s source of entertainment in the desolate Thar desert. 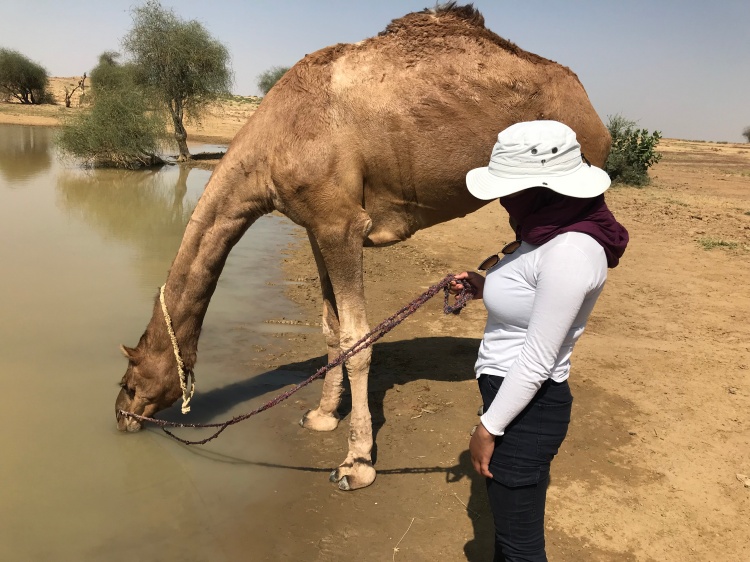 Nearing the end of the first day, the guides stopped to catch their breath. We decided it was a great opportunity to take a group photo while riding the camels.

On the second day, we rested at a mini oasis where some of us accompanied our camels while they got a drink. It was during this 3 hour lunch break that we witnessed a small sandstorm in the desert. I saw the sand rift through the desert; it looked gentle from far. As it approached our resting site, it was not very gentle and the sand was all over our food and mats.

The sandstorm was not the only thing that we saw that break; we got a first sight of wildlife in the desert as well. There were all kinds of cattle that the herders brought to our borrowed sanctuary for water. The shepherd was milking a goat and is holding the fresh product in his hand. 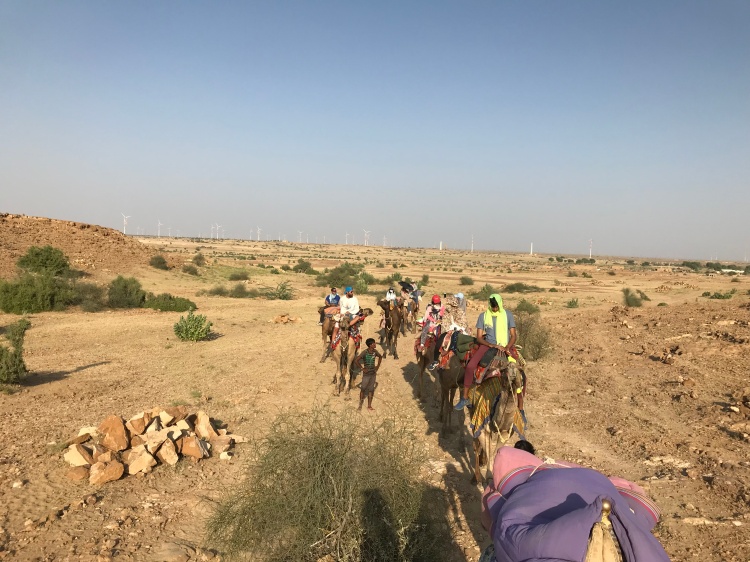 The number of wind turbines in the desert was astonishing, and at night they reflected red lights that were as hard to count as the stars in the sky. 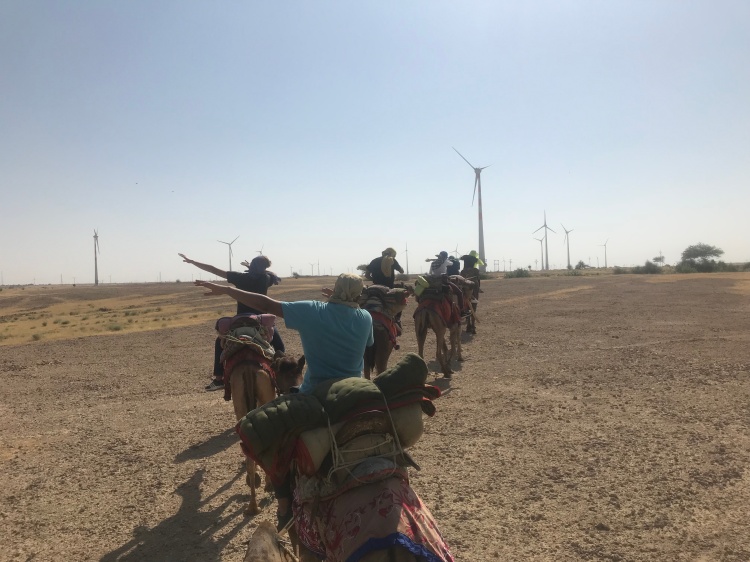 To finish our safari, we ended with a dab.