Photos by Dorinda Hardage and text by Abdul Ansari

On Oct. 9, 2017, I woke up at 6 a.m. thinking it was just another Monday morning.  I decided to go back to sleep before I realized with a jolt, it’s Activity Week.  I was going to Jim Corbett National Park in the Nainital District, Uttarakhand, India, an opportunity to observe wild elephants and tigers amongst many others things.

As I leaped out of bed with excitement I didn’t know that we wouldn’t reach our beautiful resort, Falcon Nest, for a long time.  The bus ride started exactly two hours later, right on time, so we settled into our seats, told we’d be there in about five hours. However, due to broken bridges, rocky rivers turned into bypass roads, slow restaurant service, and of course, Indian traffic, we arrived in not in five hours but twelve.

The next morning I woke up to the cool refreshing air from the fan in my impressive room, supplied with its own water geysers, good showers and even an Air Conditioner.  As the daylight got stronger I made my way to the dining hall for breakfast, and that’s when I realized how beautiful our resort was.

Butterflies caught my eyes and I followed them as they flew up to the tall trees towering over the rooms, next to the neatly groomed gardens that seemed to surround us on all sides. 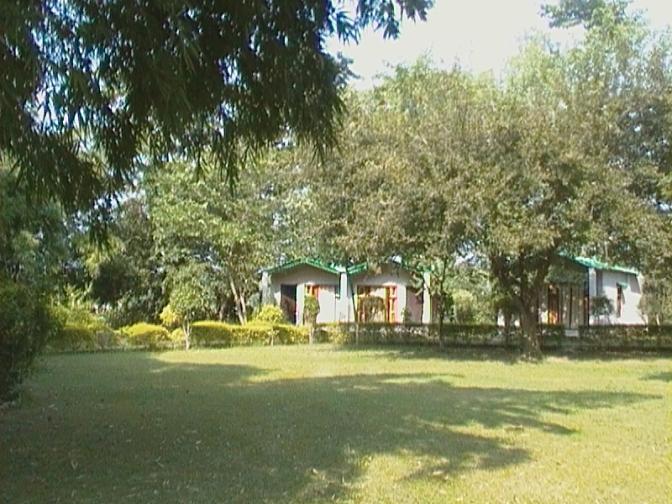 As I sat in the dining hall eating and listening to the excited chatter of my classmates, I found it hard to sit as I waited for the fun to begin.

Half an hour later, I was standing at the back of an open jeep speeding away in the middle of the jungle towards Samsara, the Resort and Club.

At the resort, we had access to a rock climbing wall and a zip line connecting to the other end of the garden. We all had lots of fun making use of them.

Later in the evening, I captured some photos of the pleasant walk through the jungle to Kosi Barrage river nearby Falcon Nest.  The place was buzzing with people and monkeys relaxing in the gardens on the banks of the river.  Leaning over the handrail, I threw biscuit crumbs to the school of catfish down below.  The river was buzzing with life: schools of fish, lots of different birds and of course the busy bridge stretching across the full length.  It was a great day and I had my hopes up for the rest of the trip. 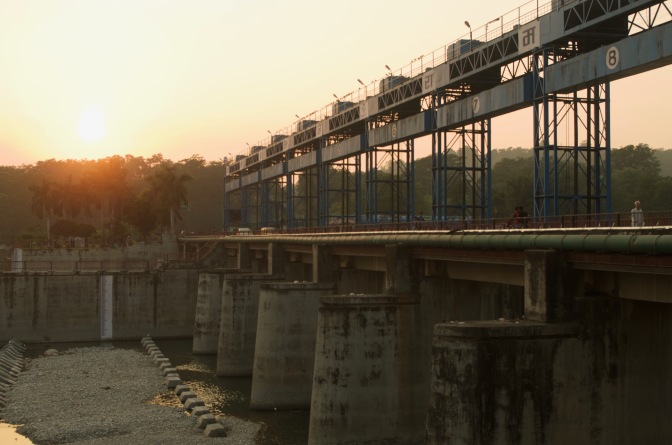 A busy bridge over the Kosi Barrage river.

Birds resting in the cool of the evening at the river

The next day was another early morning.  It was still dark when I slouched into a seat at the back of the open jeep. A minute later, I found myself zooming through the silent morning, passing local towns and the jungle.  Away from the towns, I was about to doze off when our guide shouted “Elephants!”

And there they were, two massive, grey beasts standing in the yellow wheat fields. Unfortunately, even when I stood on my seat I could only see their backs.  Once the rocky road started we were in the real jungle. We crossed streams alongside which deer, jackals and peacocks played and drank. We even caught sight of an elegant eagle perched far away on a branch. I was hoping to see the main attraction, tigers, but we only got to see a couple of tiger-paw prints.  Even so, I was quite satisfied at the end of the morning.  It truly was amazing viewing wild animals in their natural habitats.

Jackals and peacocks (in the back) having a drink of water early in the morning. 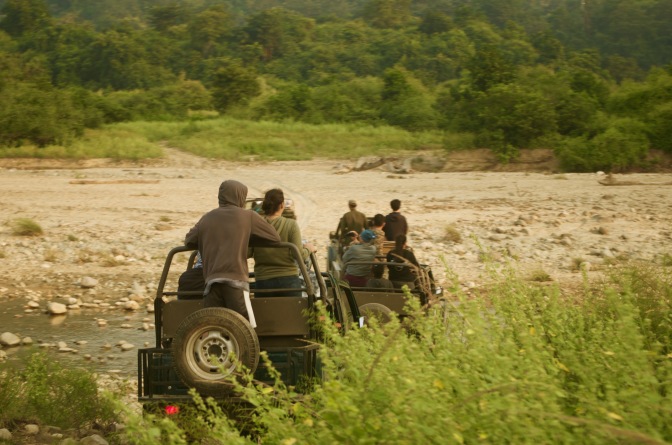 We were constantly looking around to catch a glimpse of animals.

After a lazy afternoon we headed to a local village right behind our resort, it was a typical Indian village with widespread farms, a never-ending irrigation canal in the middle, and cows mooing all around.

One of the many small houses surrounded by the yellow wheat fields.

Thursday morning was a relaxed one, but not for long.  We had a lot to do on that day, and we set off walking at 10 am. I quickly got to the front of the group to walk in the cool shade of trees and tall bushes in the midst of the heat.

We reached our destination quickly enough: a small village school, where school kids up to grade four were giving tests.  As the kids finished off their tests, we brainstormed about what we can teach these kids, and we eventually decided on art and dance.  I had an amazing time watching those kids learn without computers or desks and chairs, and they were enjoying learning about our culture too.

The school kids carefully observed what we were trying to teach them and then tried their best to please us.

Thursday evening was a funny one, I got ready to play some team games such as tug-of-war etc. but half our group was asleep or not in the mood to play any games.  I quickly paired with a classmate to participate in the first challenge of untangling two pieces of strings that were tied to our hands, and of course, it was impossible, but our guide made it look so easy when he showed us how to do it.  Later, as I joined another team I had a great deal of laughter, frustration at my team-mates, and the usual winning and losing that goes along with team games.

The last day wasn’t the greatest for most of the group, but I enjoyed the full-day hike through the hills, down the valley, into the river, and back up again on the other side.  On the way, I saw villagers on their daily routines, more school kids, and a cold slippery river which I didn’t hesitate to jump into to relieve myself of the hot sun.  Six hours later, I was back at the top of the hill sitting in a jeep, waiting for the slow ones to catch up.  At the back of the jeep, I had my head up and eyes focused on the jungle on the side with hopes of catching sight of a tiger, but I had no luck.

Walking down the hill was the easy part of the hike, and so, there were no complaints and groans.

“There it is!”  We couldn’t wait to jump into the beautiful river. 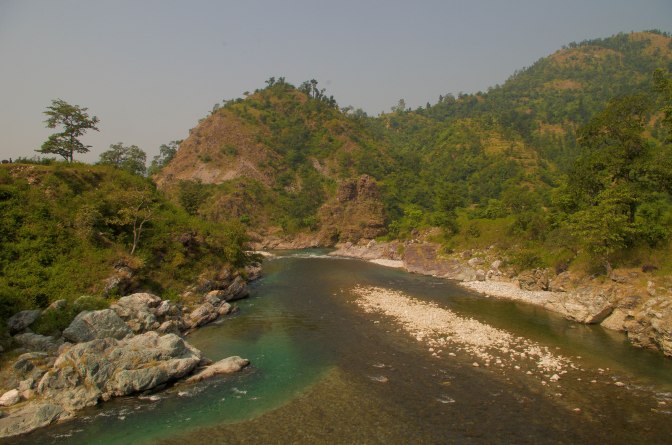 Another photo of the cold and refreshing river.

Walking back up the hill to the other side was a major part of the hike and also a major source of groaning from the group.

Later in the evening, I sat on my bed reviewing my photos and realized with another jolt, this time a depressing one, that I was going to be sitting on the bus for another 12 dreadful hours, headed back home.  I got up to pack my bags against my own will and then got into bed for a mournful and restless night.

On the next morning, I woke up at 4:30 a.m, and half an hour later I was standing amongst the others thanking the staff of Falcon Nest for their services. Then, I reluctantly loaded my luggage in the loud and uncomfortable bus for the final time to head home.  The whole bus ride, all I could think about was Corbett National park, a place I’ll never forget.

Abdul Malik Ansari, Class of 2019, joined Woodstock in 2010 and has been a member of the Woodstocker since 2017. His passions are to follow his dreams, watch and play football. He prefers not to have any free time. View all posts by Abdul Malik Ansari