After a fifteen-hour journey from Mussoorie to Dharamsala, I got out of the bus with a sore back and a stiff neck. However, after stretching and breathing in the fresh air, I felt revived. After all, Dharamsala is a holy city in Himachal Pradesh, famously known for its Buddhist culture. It is home to His Holiness the Dalai Lama and the Tibetan government-in-exile.  This place was my destination for the next five days of Activity Week, a place that is also home to thousands of Tibetans who fled their home country, a place where they weren’t refugees. This was Tibet, in India.

We got out of the bus at around 6 in the evening, and carried our suitcases to the hotel while passing through various market streets. I assumed that Dharamsala was going to be very peaceful and quiet, considering it’s holy and spiritual significance. However, I was proven wrong. The hustle and bustle on the market streets almost matched that of a big city such as Delhi. The city was buzzing, even at night, with tourists bargaining the prices of the local goods.

This is one of the street shops that I passed by, with shawls, and art pieces of the Buddha and the Mandala, on display. There is one thing I know for sure now: Dharamsala is full of street shops selling shawls with local prints, or art pieces of things found locally as well. If you forgot to buy something somewhere, it wasn’t a problem since there were hundreds of other shops down the road selling the same exact thing.

It was confusing at first, I felt like I had already crossed most of the shops, or that I was just walking in circles and ended up at the same exact place every time. Turns out, the shops were the culprits. After I realised this, I started to notice the subtle differences between them, such as the differences in prices, the shopkeepers, the quality of the goods as well as the interiors of the shops. 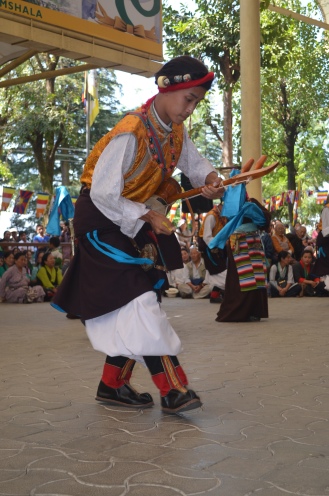 We were greeted by Dharamsala’s 50th celebration at the Dalai Lama Temple the next morning where a series of dance and vocal performances took place. The entire hall was full of people buzzing with excitement. There was so much happiness in one place, and amidst such a violent and war-stricken world, it was extremely refreshing. Everything had so much color and energy. Being able to experience such an important event was an honor. 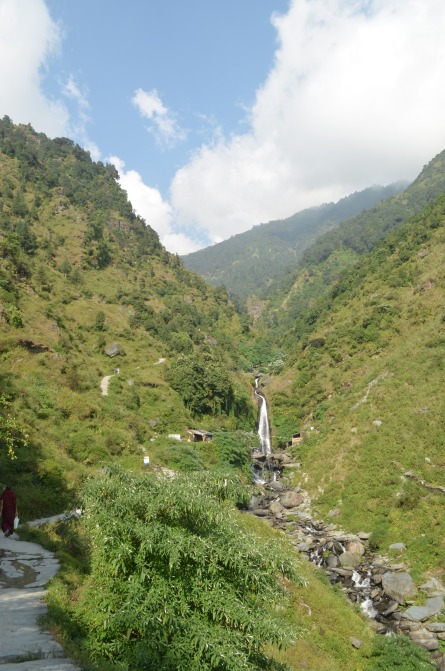 After the event, we decided to head over to the Bhagsunag Waterfall. To our disappointment, we found out that the waterfall was a long, tiring and steep hike away. However, the view from a distance was amazing. It was a big change from experiencing and immersing ourselves in the culture in the morning, to appreciating Dharamsala’s greenery and nature in the afternoon. Many tourists could be seen taking a dip in the chilly water, and visiting the Bhagsunag temple located near the waterfall to seek Lord Shiva’s blessings.

On the 3rd day, we visited the Norbulingka Institute. It is dedicated to the preservation of the Tibetan culture in its literary and artistic forms. In order for the visitors to get a deeper understanding of the profound culture, they held workshops. I was lucky enough to attend one on wood painting. Growing up, I always read fairy tales, with beautiful gardens everywhere and dogs running around, along with extremely friendly people. Now, I was a part of that fairy tale.  The world today has made me lose faith in humanity; however, my visit to Norbulingka restored that faith. 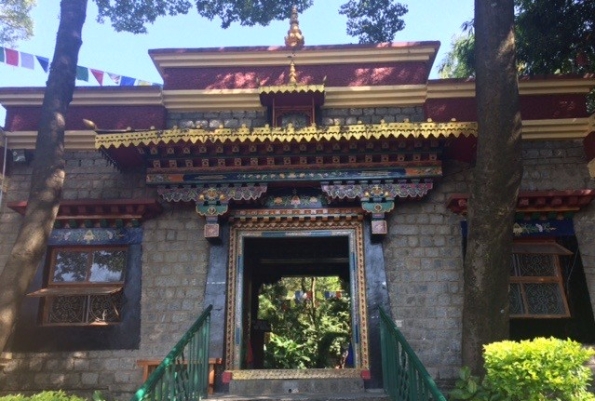 As I looked at the other side through the entrance gate, it looked like a painting. Unreal would be the best word to describe it. I got to see the culture right from the beginning, starting with the design on the entrance gate. 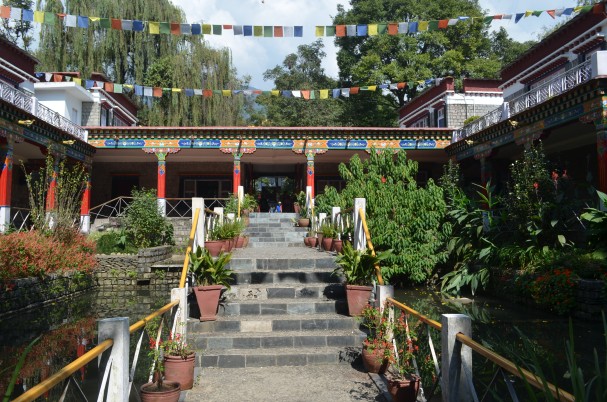 Upon entering, my mind was blown away. The traditional Tibetan style gave me a breath of what the real deal would be like. The real Tibet. The one overthrown by China.

The next day, we visited Tibetan Children’s Village. It was built for the care and education of Tibetan refugee children. It all started 54 years ago. Since then China has made multiple threats to close down the school and ruining it somehow. As our tour started, we took a look at the dorms. The tour guide, with sad eyes, told us that the Tibetan refugees who didn’t have any place to go to were always welcome to come stay there, no matter how old they were. This warmed our hearts. A sense of community so strong was rare.

Later on, as we went on to the kindergarten classes to interact with the children, we were greeted by the most adorable view ever. Young Tibetan children, aged between 3-5, were all together singing and writing in their language. This really stood out to me, since most people think that English is the language of the developed people. However, to instil the Tibetan culture and language in the minds of young Tibetans, especially in this modern world, was different.

To say we looked out of place was an understatement. But through hand gestures and laughter about silly things that appeal to children, we connected with them. That’s when I realised that words aren’t always needed to communicate.

Since I couldn’t ask the girl for a picture, because I didn’t know how to, I simply just showed her my camera and she instantly smiled. 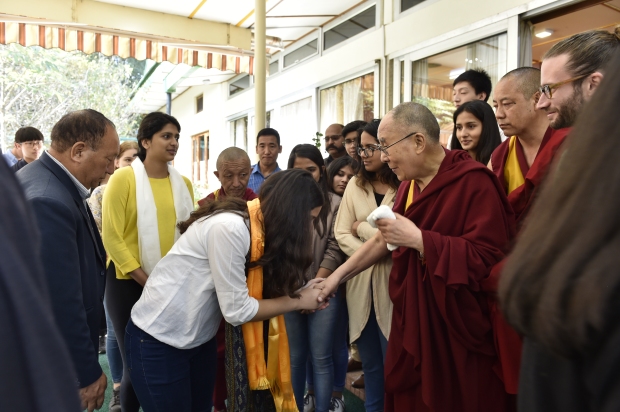 “We’re going to meet the Dalai Lama!” said our chaperone. The screams that followed soon after did not go unheard. I couldn’t believe it. His Holiness the Dalai Lama was in Dharamsala, at the same time we were! That was enough to make me happy. As we went to the Dalai Lama Temple with our official IDs in hand, waiting in line to get through the security check, giggling and shaking with nervousness.

The security guards took our bags away, we weren’t allowed to take anything inside except the sacred cloth, Khata, which people take for the Dalai Lama to bless. The generous helpers there seemed to noice my sadness as I looked at my empty hands, and  gave us a few Khatas. As my turn came, I could feel my heartbeat racing. His warm hands held mine as he blessed me. Overwhelmed, my eyes brimmed with tears.

After everyone had held his hands and received his blessings, we had the chance to talk to him in a group. “You are the next generation, and it’s upto you to make the world a better place. Whatever happened in the past is in the past.” said Dalai Lama, as he pointed at us. We left the temple in a daze, unable to tell whether it was all a dream or not. To be in the presence of someone considered equivalent to God was the highlight of this trip.

The pictures of the Dalai Lama were, however, taken by the people working at the temple.

One thought on “A Week Away: Shopping, Sightseeing and Meeting the Dalai Lama in Dharamsala”