“You are old and I am young,” Dr. Satish Kumar, 81-year-old activist and news editor, said as he talked about his life-long commitment to living a life of peace in the Parker hall on Nov. 1.

On his “peace walk” in 1962, Dr. Kumar attempted to travel without any money from India to the Soviet Union, France, UK, and finally the United States — all to fight against rapid nuclear proliferation during the Cold War.

As he marched along international borders in a hermetic time period, Dr. Kumar taught students the value of perseverance in pursuing one’s goals.

After his talk, a group of students approached Dr. Kumar with urgent questions that lingered in their minds as he talked about his experiences.

Faisal Qadir, Class of 2019, asked him “if it was was justifiable to break rules to fight for peace.” Qadir said that Dr. Kumar replied by stating that rules should be made flexible in order for peace to be incorporated into them.

“He didn’t really answer my question,” he said.

Nalin Mahajan, Class of 2020, also asked Dr. Kumar about the practicality of what he was preaching in the assembly.

“If it were that easy, someone would’ve done it a 100 years ago,” Mahajan said.

Dr. Kumar replied to him by questioning him if he was an advocate of war. Dr. Kumar had given the examples of Martin Luther King Jr. and Gandhi to show that peaceful change was possible.

Mahajan said that “many freedom fighters died in order for Martin Luther King and Gandhi to achieve such peaceful protests.”

Rohan Menezes, Class of 2019, said, “He was rather an idealist about his solutions — not sure many of those solutions would be applicable to the modern world.” After the assembly, Menezes asked Dr. Kumar to talk about how one can stand up for his or her cause. Dr. Kumar suggested that Menezes be willing to stand behind his cause for the rest of his life and do something similar to what he did.

He said, “A cause is a lifetime commitment and if you are not willing to give up your life, then you should just quit.”

Mr. Simon Paul, the school chaplain, got a chance to talk to Dr. Kumar over lunch. He said that Dr. Kumar, “challenged us to be idealists.” Mr. Paul said, “what we call ‘progress’ in our society is the endless [deterioration] of the environment and progress of consumerism — If we don’t stop, we’re just going to end up destroying the planet; creating a world where a few are rich and many are poor.”

When asked about the practicality of Dr. Kumar’s philosophy, Mr. Paul said, “I don’t find anything practical about where the world is heading. We need a bit of idealism, for a better, kinder world.”

Dr. Kumar’s life has been cemented around his ambition for peace in contemporary society. He even suggested, while he was talking to Muzhgan Noori and Zuhal Haidari, two students from Afghanistan, that the Afghan people should bring the Taliban to the government and trust the government to handle them. He also suggested that North Korea and the US should sit down together and talk their issues/problems out.

However radical his solutions, a few students like Qadir were greatly inspired by his life. Qadir, when asked about what he learned from Dr. Kumar, said, “If you are passionate about something, go do it.”

On the other hand, Nalin Mahajan said, “The little walk he did —  where did it get him, did it actually make a difference to the world in general?” 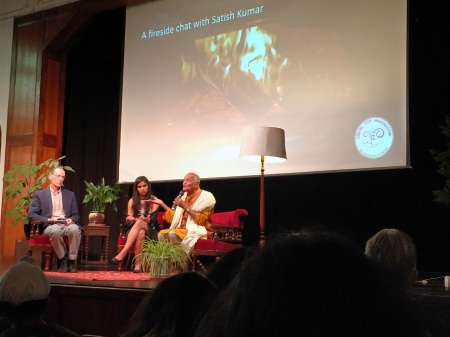