Swishathon, first introduced in 2015 by former school presidents (of the Class of 2015), has been an absolute success in Woodstock and is one of the most watched sports events every year.

However, because of the increasingly high workload and cramped schedule during Swishathon, many students found it irrational to not be treated with either a long weekend (Friday as a day off) or a half day on Friday.

For many, both players and watchers, Swishathon interfered with homework and forced them to push their work till Sunday.

“I was going to leave my homework to Sunday since my main focus on Saturday was just Swishathon,” said Palden Gonsar, player of the team, Shivaansh Garg.

For some who had important deadlines to be met had to resort to working during the intervals in between games.

“I had to do my history work while watching the match,” said Veer Arya, Class of 2020, manager of the team, Let’s be Honest.

However, Vikentiy Pashuk, Class of 2020, finds it amusing that students complain about not having a long weekend, and Swishathon interfering with their homework when people barely attended the finals.

Additionally, Mr. Davies, Upper Years Coordinator, found it impractical to have a long weekend or day off on Friday because it had only been a month since students had arrived at school and it was too early for a holiday.

“The timing of Swishathon doesn’t mend itself to a day off, it’s not a natural pause like quarter break is,” said Mr. Davies.

However, Mr. Davies does agree there were issues with the schedule of Swishathon and it left students with less time on Saturday to complete their work. 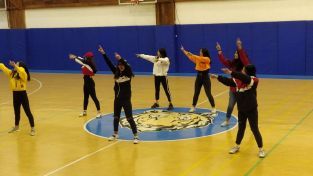