The Student Council presidential speeches for the upcoming academic year were held in Parker Hall on Monday, April 16. The three candidates running for office are Khushi Agrawal, Meher Datta, and the only male candidate, Kritin Garg, all from the Class of 2019.

Datta was the first on stage, starting by explaining her reason for running for school president; she said that she wanted to “give back” the “many opportunities to smile” that Woodstock had given her. She explained that the school had “brought [her] out of [her] darkest times” and given her a new perspective on school, which had previously been synonymous with “dread, fear, and sadness.”

Datta also explained that one of her main goals was “transparency.” She said, “STUCO does a lot of hard work and [the students] need to know about it” by having a school “bulletin on the online school forum” and regular homeroom times where STUCO members could fill-in the students with the recent STUCO meetings and ask for their input. She also briefly mentioned improving “student-teacher relationships.”

The second goal Datta mentioned was “student comfort,” concerning mental health which, according to her, is not taken “seriously enough at this school.” She mentioned the initiative created by Jigya Talwar, Class of 2020, called the “safety committee,” which has created a safe space to talk about mental, verbal, and sexual abuse. Datta said that, if she is elected, the initiative will have “full support” from her.

Asked later about her confidence in winning, she said, “I have no idea. I’m like in the middle, maybe I’ll win, maybe I won’t, I don’t know. Whether I win or not, I’m still going to try and make my ideas like put out there.”

Agrawal, Datta’s opponent, was the second to speak. She said that she was running for president because she has been here a “really long time,” (6 years) and that Woodstock has shaped “the way I think, act, dress, look, everything.”

She said she has had prior experience working with the only male candidate, Garg, to put up the 2017 talent show as class governors. Not only that, she said she was “already involved” in several of the “initiatives” that were mentioned by Datta and other initiatives such as the CFI and Community Engagement and it would be “easier” if one person was involved in several departments.

Agrawal said that her focus was on “100 percent achievable” goals in order to avoid fake promises. “Student transparency” and “student-teacher relationships” were her two focus areas. For student transparency, she said that there would be “open-STUCO meetings once a trimester,” where students could voice their opinions.

Agrawal proposed the creation of a committee comprised of “school presidents, NHS presidents, and Honor Council president,” which would deal with “miscommunication” or “blockage” in student-teacher interactions.

Speaking on her chances of winning the election, she said that she was, “not confident,” reasoning that the candidate she’s competing with is a very strong candidate. “She’s so sweet and so nice, and people love her. And I love her,” Agrawal said. 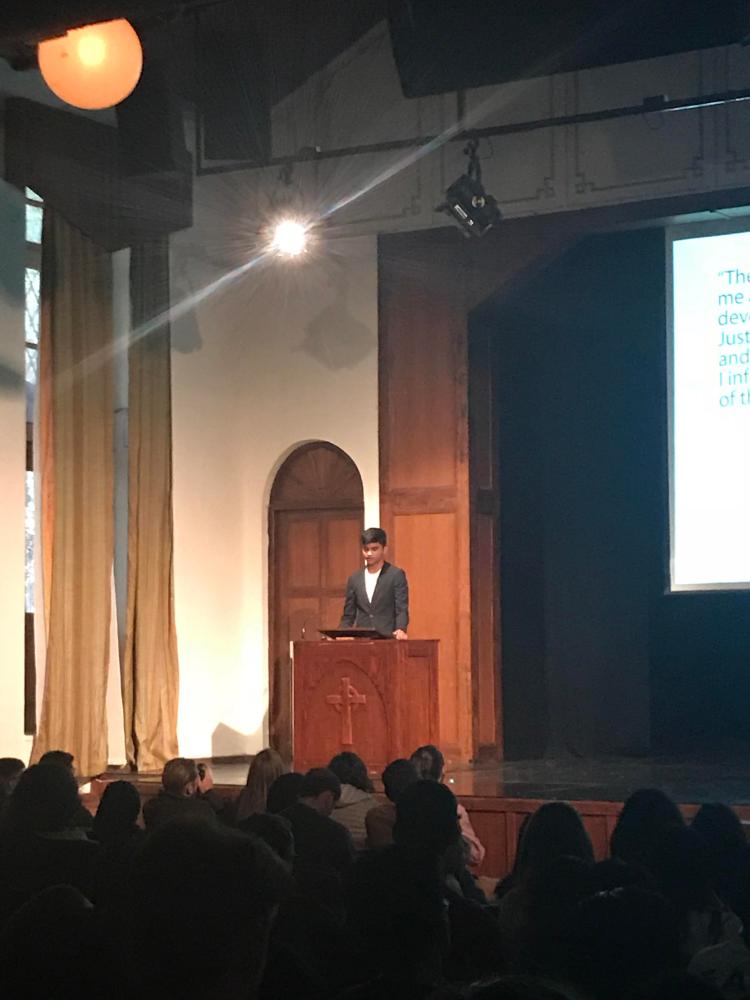 Finally, Garg spoke. He said, “For the most part, I’ve had an amazing time here” since he first set foot in this school in 2010 when he was nine.

However, he continued, “some things have changed, I no longer see the same happiness I saw. Students used to have a voice that mattered” and Student Council had “responsibilities. If students wanted to accomplish something, they had to go to STUCO.”

But being in STUCO for the last two years, he said that he had noticed that this “doesn’t seem to be true anymore.” Therefore, he stated that his goal was to improve “student-teacher relationships” and improving the relationship between “Student Council and the administration by working closely with them.”

Therefore, by developing a “mutual trust” between staff and students, where both parties could be heard, he said he would make “Woodstock great again.”

He also spoke of bringing back events such as “International Day to celebrate the community’s diversity.”

He ended his speech by introducing the collaboration between Ritz Cinema and Woodstock allowing students to “sign-up to watch a movie,” and the first movie to be screened to be “Avengers: Infinity Wars.”