One Friday after school, right before quarter break, I was ready to head home; before I got to the quad, I saw a couple of teachers and students assembling mountain bikes fresh out of cardboard boxes.  That’s when the thrill of cycling 84 kilometers on early Tuesday morning overcame my Friday-evening exhaustion.

“Yes!  I won’t have to sit in classes on Tuesday,” I said to myself as I moved in to help assemble the cool-looking bikes.

Of course, like every good Woodstocker, I started packing for the trip late on Monday night.  At 5 a.m. on Monday morning, I thought I couldn’t get out of bed; but, the thought of cycling at ridiculous speeds in the mountains and getting some time away from classrooms helped me jump out of bed.

Half-an-hour later, I was back in the quad.  There were very few “hi’s” and “good morning’s” as everyone, still half-asleep, was busy claiming the bikes we had assembled on Friday evening.  Soon after, we loaded the jeep with breakfast and took a group picture before finally heading off for a long day of pedaling.

It wasn’t before we reached Hanifl Centre that the first ray of sunlight reminded me of the beauty I was surrounded with.  The TV Tower stood out as always, meanwhile the fresh-rays highlighted the heights we were riding at, and of course, the ever-present chirping of colorful birds helped me get over my sleepiness. 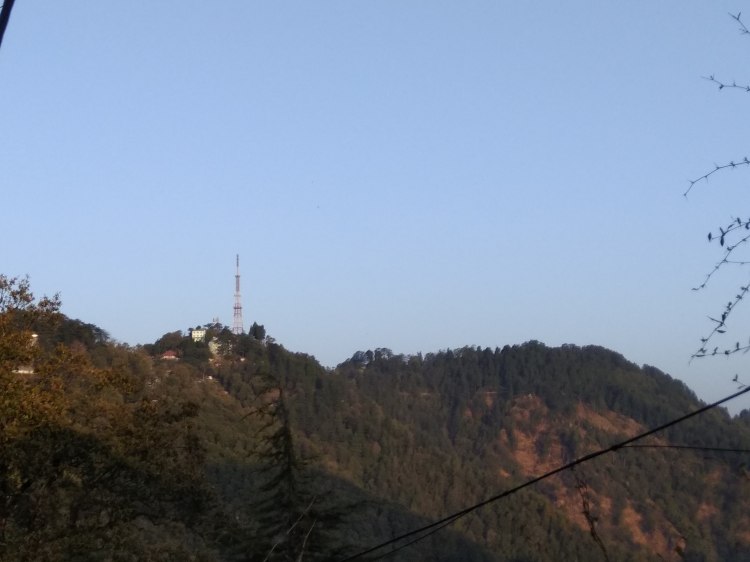 Then came the part that I live for: one of the first major downhill parts of the trip that started at Thatyur.  It was a perfect setting simulating Tom Cruise’s action-packed bike chase scene in Mission Impossible.  The curvy roads had me lean side-to-side, while I passed the occasional oncoming traffic with my shades on.  It was all perfect till I remembered that I have to take photos for this article and so I stopped to snap this one: 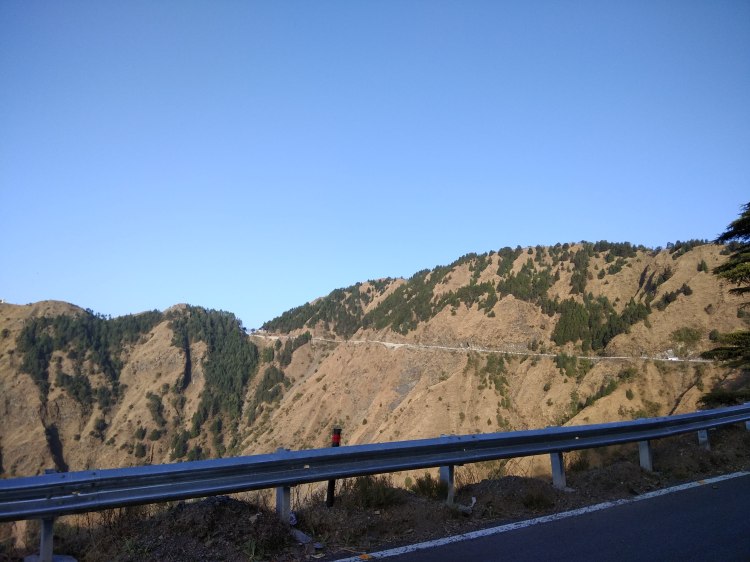 The long slope after a climb up to Thatyur

However, my short break gave the chaperones a chance to catch up and threaten me to slow down.

What’s even worse is that we took a really long breakfast break right in the middle of that downhill part, whereas I would have preferred to finish it one go.  Not to mention the half-cracked boiled eggs and squashed bananas we had to eat to quench our morning hunger.

The rest of the trip was just another cycle of climbing up and rolling down, without high speeds, and conversations with kiwi physics teachers and college-ready seniors.

However, the ever-present surprises, such as the unconquerable-looking hills, and, of course, the funny Indian truck horns, that resemble the tunes of Bollywood songs, kept my heart leaping.

Furthermore, I was lucky enough to get a glimpse into the lives of locals, who are mostly herders and farmers, in the villages spread around the hills. 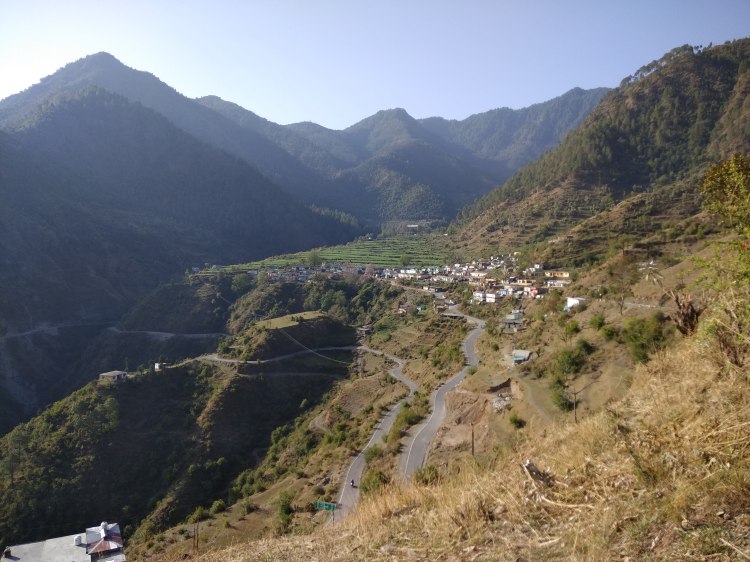 One of many villages in the hills

One too-old-to-work farmer just sits in a small hut and watches over his small terrace-farm, all day long, while his sons and daughters run around the animals and the farms.

“I used to carry 35 kilos of milk on my back, through the hills, to Mussoorie [for business] every day,” said the old farmer, as he bit into the apple we granted him. 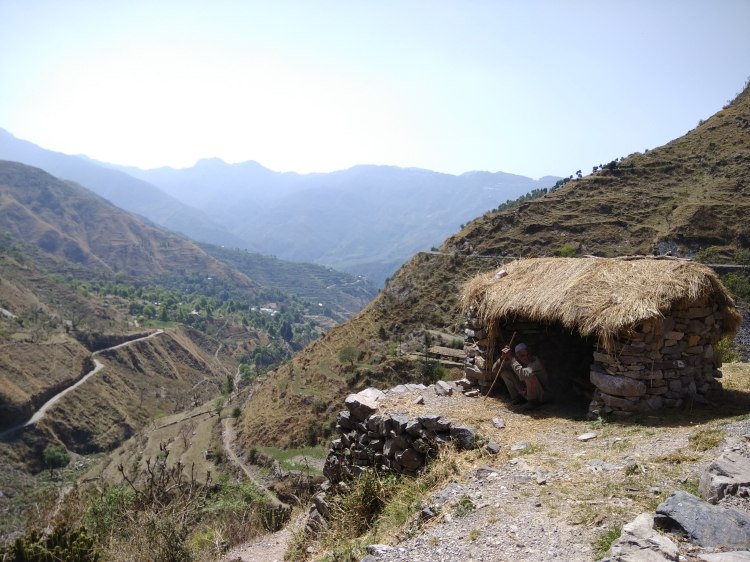 The old farmer watching over his terrace-farm

This interaction with the local farmer made me realize what luxury I luckily had, thanks to my parents. It taught me to be grateful for the things I had.  I definitely left the small hut as a changed man.

Then came the final stretch, a long drop to the bottom of the valley where our bus was waiting near the bridge crossing the stream.  I realized the chaperones were too tired to keep track of who’s going at what speed; so, I decided to let the wheels roll.

Yes, this time there was a scraped pair of knees, thanks to a dysfunctioning in the gears of a bicycle that a chaperone was riding.  However, it was just another chance for me to get by.

Yet again, we stopped in the middle of the slope, this time for lunch of course.

As I sat in the small restaurant, Dhaba (in Hindi), and ordered the famous bun-omelet, the soreness from the bumps started creeping into my forearms and my backside. However, the cool steady breeze was refreshing;  that’s when I noticed the bridge, hidden under the trees, at a distance of about 50 meters from my restaurant. Suddenly, I realized how much fun I had and how much I had learned from a day of pedaling. 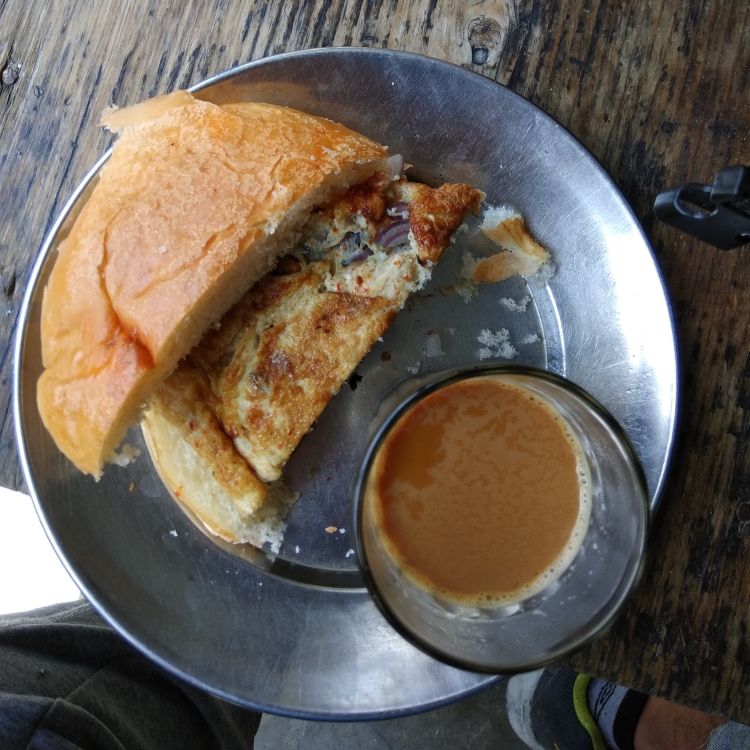 The famous bun-omelet with Chai (tea)

It was definitely a little too soon to go home and our wait for the bus made sure that didn’t happen.

Climbing back up the hill

As I sat on the bus climbing up the hill, drinking my beloved Coca-Cola, I couldn’t help but thank Woodstock for the great opportunities that it grants us students with.  Outdoor adventures too, I realized, are an important part of learning.