“[The tournament] is sort of like a league. Schools play against each other and there are four divisions. Based on how many matches [each team] wins they come first or last,” Akshaya Pradhan, Class of 2019, said.

Woodstock’s team consisted of six players who displayed an incredible amount of persistence in each division.

Despite the emptiness of the crowd stands, the players’ morale did not falter, as they cheered each other on and comforted one another during loses. The motivation that the team displayed was unbelievable.

The tournament gave opportunities to the aspiring players to not only practice their skills but also to introduce Woodstock to the table tennis culture, one which has lingered as a trivial part of the sports enrichment program in the past.

While Mr. Negi, the school registrar, and Mrs. Nagarwalla, the enrichment coordinator, quickly noted the winners of each game and also organized the event, coaches from other teams volunteered to be referees for individual games.

Throughout the tournament, immense rigor and vehemence were shown by all the teams. Especially in finals, as there was a silence that hung in the air between the set of rallies being played for every point.

As soon as any player got a point, the void would break into roars from teammates and their coaches. The trophies and medals for after the tournament

Shaurya Bhansali, Class of 2019, said that the event was an immense success and he looks forward to more table tennis tournaments at Woodstock.

“I am proud of the boys and their performance in the tournament,” Mr. Narender Kumar, the coach of the table tennis team, said. 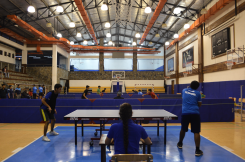