Sincere attention, modesty, and smiles were all I received from Mr. Shashank Katoch, the Program Manager of the Sambhaavnaa institution. For Activity Week, in Dharamshala, our group visited the social workshop institution where I met Mr. Katoch. And to my surprise, his untainted smile, too, had its own story to tell.

“When I was a teenager, I had a fear to meet a man,” Mr. Katoch said, explaining how he grew to hate men and be more alarmed “with a group of males.” As throughout his life, his father was the only man he encountered.

By calling what his father deeds as “torture,” he emphasized that it was beyond domestic abuse. It was more like torments that pierced deep into his bones. With a grave face, Mr. Katoch said that he had “no words to express” the pain from father’s “beating” and insults towards his mother and grandmother. With a mixture of distasteful anger and melancholy on his face, he sighed and described how his experience was too deep to truly heal.

“If there [was a] woman, I felt that she will save me if someone got violent with me. A woman will save me,” Mr. Katoch said. In fact, he had thrived in rough times through emotional and mental support from two significant women in his life: his mother and grandmother. 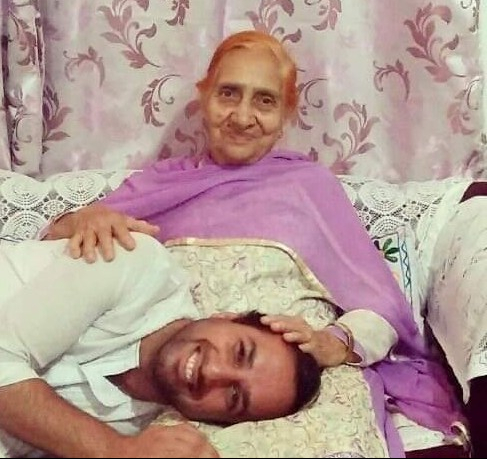 He explained that they had always supported him and provided him with unconditional love.

When Mr. Katoch was young, he and his brother studied in local schools while his father worked in the fields and his mother at a school as a teacher.

But farming was not apt to support the family of four. Slowly, as time went by, the financial burden became increasingly prominent for Mr. Katoch’s family. From education to clothing, his parents were not able to provide the basic necessities in the catastrophe. This crisis deteriorated to a point where even food was running short.

In the midst of the dilemma, his paternal grandmother was very gracious and compassionate. With the little money she received as a pension from the government after her husband’s departure, she supported Mr. Katoch’s family in every way she could.

When the family was completely devoid of resources, his grandmother always consoled them and provided them with essential needs. Often she would extend her love to support the family emotionally as well. To Mr. Katoch, “her love, affection, and understandings” were not only reassurances in times of disaster, but also a place to take refuge in her love.

His mother, Mrs. Poonam Katoch, was another strong pillar while faced with the harsh reality. She provided more moral guidance and support in times of need.

“Don’t live like your father. I suffered because of him. So I don’t want your wife to suffer because of you,” Mrs. Poonam said to Mr. Katoch. This was one of the sternest lessons taught. 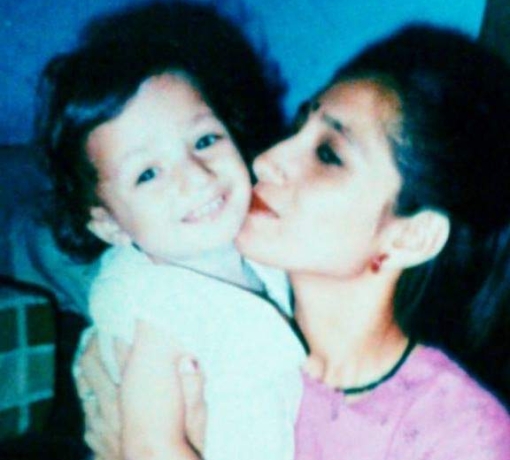 “Her childhood was not very good. Her mother was a survivor of domestic violence. She saw her mother crying and her father was beating her in front of her [as] she bled.” Mr. Katoch said. Mrs. Poonam being a survivor of the domestic abuse chain, taught him a lot about feminism: how to respect women, the “status of women, and the depth of the patriarchy in India.”

Despite being apathetic towards marriage because of the amount of violence and discrimination she was exposed to, she ended up marrying a person who was not the person she imagined.

After her marriage, Mrs. Poonam, who was described as a “very intelligent, very smart, [and a] very good looking woman,” was forced to walk away from her former life and fit into a new world by her husband. She left her friends, education, and profession, for the wedlock house of restrictions and violence.

Even while Mr. Katoch and his mother grappled for their lives under the patriarch, she tried her best to make Mr. Katoch’s life “good.” She was there for her son in the midst of loneliness, confusion, and wrongdoing.

She was an epitome of a mentor, possessing qualities of understanding and loyalty; she motivated Mr. Katoch to be passionate about justice and social rights. This led him to pursue a bachelor’s degree in Social work and other corresponding degrees. After completing his bachelor’s degree, he also earned a master’s in Social Work (MSW).

He accredited a lot of his academic success to Mrs. Poonam’s moral support, which stimulated the spirituality of his willingness to achieve a master’s degree.

From then on, Mr. Katoch looked for institutions and organizations like Sambhaavnaa to earn while learning. Attending numerous social workshops, usually for about two weeks, he grasped as much experience as possible: talking to new people and arguing current issues of India.

In his journey of achieving his passion, he attended Buniyaad, a social workshop organized by Sambhaavnaa. “After completing that workshop, I realized that this was the place that I was looking for,” Mr. Katoch said, who is now working as a Program Manager to help design workshops, outreach, and coordinate with participants and the Sambhaavnaa resource center.

He also worked in the Himalayan Public school as a teacher before joining Sambhaavnaa, where he met the love of his life: Alisha Poonam. 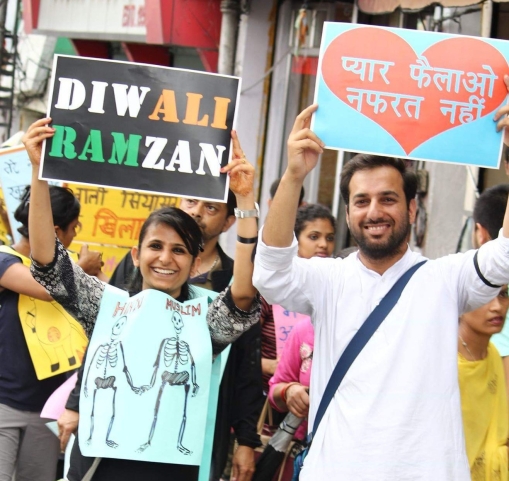 Unfortunately, their love was not all rainbows and butterflies. There was an obstruction between them: the caste system.

“He told his daughter that ‘you don’t have to come [to work] now’ and he fired both of us,” Mr. Katoch said, as he proceeded to explain the complexity of the situation. He explained how hard it is to marry a person from a different religion, caste, and class in India. Though they were from the same religion, he was from a “farmer’s family” and she was from a business-owning family. Hence, her parents disregarded their love.

Even after he joined Sambhaavnaa, they were secretly in a relationship. Hiding from Mrs. Poonam’s parents, their love grew passionately. But in no time, the cat was out of the bag. When Mrs. Poonam joined an eight-day workshop in Sambhaavnaa, where she met Mr. Katoch, her parents got to know about the affair and she was “house arrested by her parents.”

With no phone, connection, and people to ask about her wellbeing, the six days of isolation for them was “a torment.” However, despite the fact that they were torn apart, their “love was getting more strong.”

There were no means of communication. Still, they waited even though seeing each other did not guarantee a future because they were willing to.

As soon as she was let out, they eloped and got married. Due to this, Mrs. Alisha was disowned by her father. “It was a love marriage,” Mr. Katoch said, as he explained the hardship of having a love marriage in India, with a hint of a bittersweet smile.

During the interview, this brief summary of Mr. Shashank Katoch’s life left a powerful image of love on me. Through his story, I have realized that love is not something you can restrict to words. It is beyond that. It is not just affection, interest, or pleasure in something or someone, it is “willingness.”

Mr. Katoch’s mother was able to raise her son upright because she had the willingness to provide a good life and future for him and his future wife. Mr. Katoch was able to finish his B.A. degree and his MSW because he had the fire in him, motivating him to move on. And finally, Mr. Katoch and his partner were able to hold onto each other even in the midst of tumult, because they loved, and still do.

Probably, love exists everywhere, in different forms, secretly right beside us, because love is not always equivalent to romantic relationships.

2 thoughts on “Humans of Activity Week: A life bound by an iron will”