As I observed dying turtles and choking marine animals painted all over my Instagram feed, I wondered if these images actually motivate people to make a change. After encountering numerous occasions of my peers bleating about minor inconveniences like the food for lunch, or the walk up to school, – despite the fact that we are in a privileged place – I started to wonder if people truly care.

If they do not, then maybe they should.

In the 2019 Festival of Ideas, an annual Upper Years event, I presented my Interdisciplinary Project on the potential health hazards of PET bottles. Following my presentation, I went around campus to ask people to sign a petition to ban Bisleri bottles.

One of the first responses was: “Bisleri bottles are more convenient.” 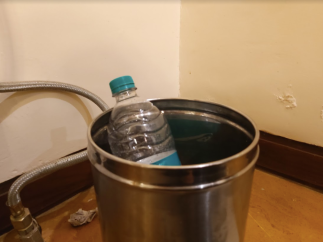 This was when I realized that I was not fighting Bisleri bottles around campus or unyielding students who, as a collective, consume about 20,000 bottles in an academic year. I was fighting the façade of convenience that plastic bottles put up to hide their impact on the environment and us. I was fighting the manipulative propaganda on dirty tap water that big corporations advertise to the unknowing customer through media.

Plastic waste has been brought into the public eye since the 19th century. For generations, people have been warned about plastic waste and its environmental implications. Despite this, the egotistical argument pervading every aspect of our privileged lives still rings bold and strong: comfort.

One of the most crucial points that need to be emphasized is leachate — any type of fluid leaching landfills which is generated from liquids present in the waste. When plastic bottles are thrown into landfills or simply disposed to the environment, toxic chemicals leach out from the plastic to the surrounding areas. The porous nature of PET bottle plastic facilitates this process. This is a critical phenomenon to note since nearly 85% of the drinking water in India is constituted by groundwater sources.

What this means for India is that our already limited water sources are going to be contaminated. India is speedily running out of groundwater, and with the current rate of urbanization and exploitation of the aquifers, nature will not only be defeated by human cruelty but also by convenience.

We should not pollute the little that is remaining.

Apart from the aquifers, the Ganges, the river that is responsible for carrying India’s livelihood, is also being impacted. As leachates are washed down the river, especially during the monsoon season from the Mussoorie hills, the trash of convenience chokes those who live anywhere below Mussoorie via the Ganga.

The implications of plastic waste are not far fetched — they have been under the public’s noses since the 1800s. At times, we may feel disconnected from the events around us since our main source is a rectangular digital screen. However, we should stop running away from these crises or pretend that we are not concerned about these issues just because it is easier to ignore a problem rather than acting upon it.

John Donne, the famous metaphysical poet, said, “every man is a piece of a continent, a part of the main.” We cannot incarcerate ourselves into the “convenience box” thinking that the box will last, for it is constructed from deception and is falling into a catastrophe along with the entire world. We cannot pretend that we do not see our impact on the environment to preserve our fabricated future.

We should not rest nor abide by the momentary pleasures. Since “no man is an island, entire of itself,” when the world falls apart as a consequence of our actions, the responsibility will be in your hands as much as anyone else’s.

All images provided by Daeun Lee

Daeun Lee is a staff reporter for The Woodstocker

View all posts by Daeun Lee

2 thoughts on “A Convenient Lie”