Kicking a football, shouts from the crowd. Glory, determination, passion and will. Sweat lingering above one’s head, wiping it off to see the scoreboard. The game is tied, but they must persist, in order to achieve the recognition that they strive for. Goalathon today is fuelled by these emotions. Clashes between teams, beef between friends — all for one single golden trophy.

Initially, Goalathon was introduced by Kritika Tara Deb, Class of 2011, as a fun, charity-raising event for a single afternoon, where the students from Middle Years and Upper Years could clash head to head in a match of indoor football.

Uddhav Mehra, Class of 2012, witnessed Goalathon twice during his time at Woodstock. Although he never played, he felt there was no serious atmosphere and it was “all for good fun and charity.”

Only after this core principle was established did Goalathon flourish over the years — becoming the biggest student-run event.

Over the years, the purpose of Goalathon has changed. From a charitable one-day event, it has evolved into an event that spans the course of three days; it has gained so much popularity that there is no longer school on the Friday that Goalathon happens and is a homework-free weekend.

It has developed to become a full-fledged indoor football tournament. And just as it has evolved, it’s original charitable purpose is no longer known to the masses of students that participate in it like, Suryansh Singh, class of 2021, who said, “I don’t know where the money is going.”

Although Goalathon might not be as charitable as it used to be, Mr. Steve Luukkonen, PE teacher who has witnessed and participated in all six Goalathons, said that “it is an entire entity by itself — showcasing a large number of controversies as well as sportsmanship. After all, it’s the only time when we come together as a school.”

Contrary to Mr. Luukkonen’s views, a rough eye count was done by members of The Woodstocker during the Friday and Saturday that Goalathon occurred. During Friday, Sept. 1 at 4:45 p.m., there were roughly 160 students seated in the bleachers or present in the top floor of the gym. During Saturday at around 10:30 a.m. around 115 students were present in the bleachers or in the top floors of the gym.

There are 486 students from grades 5 to 12, which means that roughly 33 percent of the student population was present at the games happening at the middle of the afternoon on Friday and less than 25 percent was watching the quarter and semi-finals.

Mr. Andy Crider, Middle and Early Years coordinator, was asked about charity in Goalathon. He said, “It is all about fame right now. When we have grades upset about winning or losing, the notion that seniors should win because ‘it is their year or time,’ it is all about fame.”

Saarth Mutreja, a player on Jae’s Creatures, said that fundraising was not important to his team. “We didn’t give our sponsor sheets,” he said. “We lost ours on the last day.” Even though Mutreja’s team didn’t submit their sponsor sheets, they were still allowed to participate.

Two weeks after Goalathon ended, September 15, student council presidents Ameya Singh and Varun Khanna announced that they raised a projected amount of “one lakh thirty-five thousand rupees” from Goalathon. However, after one week of this announcement, no further advancement in their money collecting process was made known to either students or staff.

Goalathon has evolved and so has its purpose. Mr. Luukkonen, when asked about the success of Goalathon, said, “It’s up there with Win Mumby, and is one of the biggest events of the year.” In fact, he added, “Goalathon could overtake Win Mumby” because of the student involvement. 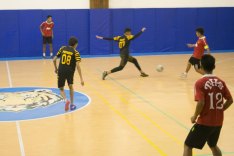