It’s a lazy Sunday afternoon, yet students are fully dressed and outside, instead of sleeping in. With loose notes and wallets in their hands, some are waiting impatiently for their food orders at the guard post, or in the parking lot, while some take this opportunity to play basketball, or just walk around and enjoy the currently sunny weather with their friends.

“I’ve been waiting for an hour here!” said Sera Andrugtsang, Class of 2018, while looking around at the children waiting in the rain for their Kathi rolls. They talk on the phone with the delivery guy, asking him impatiently when he’s going to reach, while the others show their annoyance by screaming in anger. The sound of a motorcycle coming down can be heard, and everyone screams in joy running towards the gate, waiting to grab their orders and get back to work. 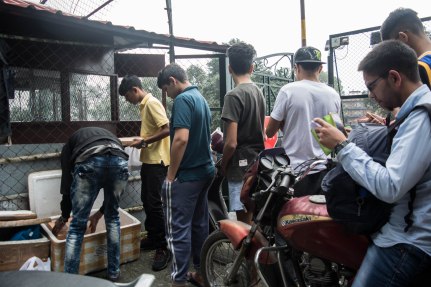 Students waiting in line to get their orders, while the delivery guy bends down to sort through the orders. Photo by Faisal Qadir

This is also the sound of the new policy change in the system of delivery to dorms. Earlier students would get their ordered food right at their dorms’ doorstep, whereas they now have to go all the way to the entrance, or to the parking lot of the dorms. It’s not much of a walk, but it’s quite the inconvenience as Tej Dhungana, Class of 2021, said, “It’s garbage! I don’t want to walk all the way to Ridgewood.”

Lalchhanhimi Bungsut, Class of 2018, said, “It’s pretty annoying for the students to walk all the way down and up to dorms and put on presentable clothes (on a Sunday).”

This change has good reasons behind it, as Mr. Jeffery Doerfler, Dean of Student Life said, “It’s a safety measure. When we had an outside group come and evaluate our safety, they noticed that too many staff members were walking where the students were.” But, the delivery people and other staff have been providing their services to Woodstock for more than 50 years now. Why is this a problem now? Mr. Doerfler has an answer to that, “The guards are supposed to check the packages at the gate because over the years we’ve had reports of the delivery guys delivering alcohol to the students along with their food.”

While students are always complaining about school, Woodstock makes old men whine about school policies as well. The famous Mr. Ram Chandar, who provides the students with groceries, said, “This might be good for the school according to the administration, but it’s not good for the children nor the suppliers.” This new policy has affected 50 percent of his sales since, “People are ordering less now, and they have to carry everything on their own.” (Instead of having the Ram Chandar’s coolies help out the students carry their groceries to the dorms.)

Apart from that, “The guards don’t know how to behave with the coolies and the vendors. They’re very rude and sometimes, when the students don’t come on time to take their orders, they threaten us by saying, “Take all your stuff back, otherwise we’ll throw it over the cliff,” said Mr. Chandar. As if this transition wasn’t hard enough on him, the guards are making it even more difficult. 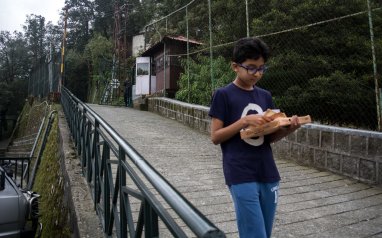 Student finally walks back to dorms after collecting his order. Photo by Faisal Qadir